The Global Steel Trade that Trump Just Hit with Tariffs? by Wolf Richter

Who totally dominates it?

Steel tariffs are now in place, and the world is grumbling and threatening retaliation against the US. Its closest partners, such as Canada, are trying to figure out how to navigate the waters. Part of Corporate America is lobbying against it and wagging its checkbook. The other part of Corporate America — the part that has been lobbying for it — is now grinning from ear-to-ear. And the media is steeped in this melee. But just who is producing all this steel, and who is dominating this trade?

In April, China’s crude steel production rose 4.8% from a year ago to 76.7 million tonnes (Mt), the highest on record, according to the World Steel Association. This was nearly 11 times as large as the 6.9 Mt of crude steel that the US produced.

China’s production was nine times as large as that of the second and third largest producers, Japan and India, each with 8.7 Mt. World production of crude steel in April was 148.3 Mt, of which China’s share was 51.7%.

And with somewhat awkward timing, the World Steel Association, whose members represent approximately 85% of the world’s steel production, just released its World Steel in Figures 2018, with data through 2017. So here we go, step by step. 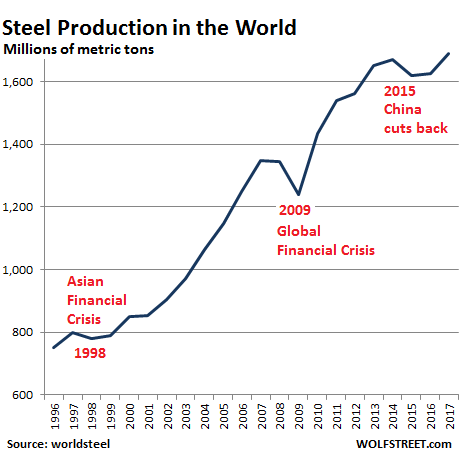 So how big of a role does China play in this?

The chart below shows steel production by some of the major regions: China (red line); Asia/Oceania without China (green line), which includes Japan, South Korea, and India; the EU (mauve line); North America, the NAFTA countries (black line), and the CIS (brown line) which includes Russia, Ukraine, and others. Note that production growth in China blew right through the Asian Financial Crisis and the Global Financial Crisis, but dipped in 2015: 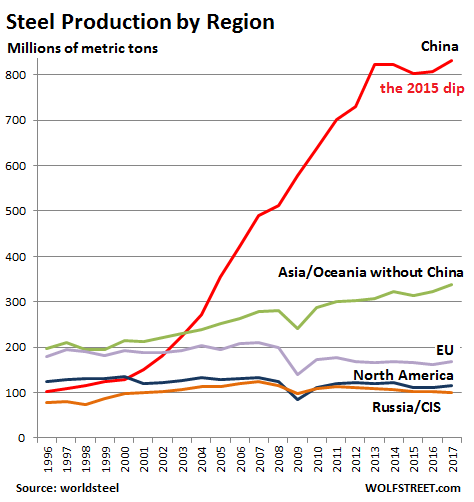 To continue reading: The Global Steel Trade that Trump Just Hit with Tariffs?

How Trump’s “Doom And Gloom” Tariffs Are Crippling American Farmers, by Tyler Durden

Tariffs on aluminum and steel are hurting farmers, and that’s before the retaliatory tariffs from China on American agricultural products kick in. From Tyler Durden at zerohedge.com:

The tariffs that President Trump vowed to put in place while campaigning – and followed through on – like many government solutions, are solving one problem while creating others at the same time. In this case, the “unintended consequences” from steel tariffs are hurting agricultural jobs across the Midwest, putting pressure on some of the most vehement supporters of President Trump.

A Reuters expose released this morning reveals how how tariffs – as well-intentioned as they may have been – have led to higher cost of goods for farmers across the country.

The authors tell several personal stories, including that of a farmer who was about to purchase a $71,000 grain mill, but had to hold off on the purchase because the seller raised the price 5% to account for the rising price of steel:

Lucas Strom, who runs a century-old family farm in rural Illinois, canceled an order to buy a new $71,000 grain storage bin last month – after the seller raised the price 5 percent in a day.

Throughout U.S. farm country, where Trump has enjoyed strong support, tariffs on steel and aluminum imports are boosting costs for equipment and infrastructure and causing some farmers and agricultural firms to scrap purchases and expansion plans, according to Reuters’ interviews with farmers, manufacturers, construction firms and food shippers.

The impact of rising steel prices on agriculture illustrates the unintended and unpredictable consequences of aggressive protectionism in a global economy. And the blow comes as farmers fear a more direct hit from retaliatory tariffs threatened by China on crops such as sorghum and soybeans, the most valuable U.S. agricultural export.

A&P Grain Systems in Maple Park, Illinois – the seller of the storage bin Strom wanted to buy with a neighboring farmer – raised its price two days after Trump announced aluminum and steel tariffs on March 1 to protect U.S. producers of the metals. Strom and his neighbor backed out.

To continue reading: How Trump’s “Doom And Gloom” Tariffs Are Crippling American Farmers

Not Even the Pentagon Thinks Tariffs Are Needed for National Defense, by Ryan McMaken

Here is the other side of the steel tariff argument. From Ryan McMaken at mises.org:

When politicians run out of good arguments, their last refuge is often the claim that what they want is “necessary for national defense.”

Given that there are no economic arguments in favor of tariffs, it makes sense that the administration has resorted to the political“national defense” argument instead.

So, even if the Trump administration were forced to admit that, yes, tariffs are bad for the incomes and standards of living for most Americans, they could still argue that everyone must make sacrifices for the sake of national security.

But do these arguments hold any water?

In a Defense Department memo, in response to the President’s tariff proposal, the Secretary of Defense states that the tariffs are not necessary:

… the US military requirements for steel and aluminum each only represent about three percent of US production. Therefore, DoD does not believe that the finds in the reports impact the ability of DoD programs to acquire the steel or aluminum necessary to meet national defense requirements

“The reports” mentioned here are Commerce Department reports pushing for the tariffs.

The Defense Department memo goes on to advocate for a far more limited tariff than what the Trump administration wants, stating “DoD continues to be concerned about the negative impact on our key allies regarding the recommended options within the reports … targeted tariffs are more preferable than a global quota or global tariff.”

The memo then concludes by noting that if the administration must have steel tariffs, it should at least wait on imposing aluminum tariffs.

Given that it is in the best interests of the Pentagon to overstate the security threats to the United States, the Department’s opposition to the scope and severity of the administration’s tariffs highlight just how truly unnecessary the tariffs are.

The DoD worries, as it should, that tariffs harm the American relationship with allies, and thus harm American security efforts.

Even worse, tariffs are harmful to domestic economic strength, which is the real source of both hard and soft American power internationally.

To continue reading: Not Even the Pentagon Thinks Tariffs Are Needed for National Defense

Once in a while SLL posts two articles together that reach diametrically opposed conclusions. Such is the case with these next two articles. From Lawrence Solomon at financialpost.com:

President Trump’s decision to apply steep tariffs to steel imports on grounds of national security met with a loud chorus of protests at home and abroad, by many trying to divine what could possibly be going through Trump’s mind. Trump is an economic illiterate, he’s a protectionist, some reasoned; he’s targeting Canada to get concessions on NAFTA, he’s playing to his base, others pronounced.

These explanations miss the mark. Though Trump doubtless sees taunting Canada on NAFTA and playing to his political base as furthering his agenda, these are but freebies, sideshows to the main event. Trump is acting sincerely, and legitimately, in the national security interests of the United States. Canada isn’t his target; China is.

Trump is old enough to know that during the Korean War, president Harry Truman seized the U.S. steel industry to maintain production for America’s then-vulnerable wartime economy. During the Second World War, when the U.S. dominated the world’s steel production, rationing was nevertheless needed — the public was even exhorted to donate their automobile bumpers to the war effort as scrap steel.

Today, the U.S. has not only lost much of its steel capacity, it’s at risk of losing the balance, making it dependent on a host of countries: Canada, its largest and most reliable foreign supplier, meets just five per cent of U.S. needs. According to the U.S. Commerce Department, the United States is now at risk of finding itself “in a position where it is unable to be certain it could meet demands for national defense and critical industries in a national emergency.” If dependent on a foreign country, the department warns, the U.S. would not have the legal authority to commandeer supplies as it could within the U.S.