The Yin and the Yang of It, by James Howard Kunstler

Hysteria has become a goal in and of itself. From James Howard Kunstler at kunstler.com:

The New York Times staffers wanted to change the paper’s longstanding motto, All the News That’s Fit to Print, to something more cutting edge, more of-the-moment, more congenial with the crypto-gnostic social justice impetus to change human nature in order to make the world a better place.

My personal suggestion was All the News That’s Fit to Print for Angry, Hysterical Women and Their Intersectional Allies, since The New York Times is now an advocacy rag, but the staff choice apparently is The Truth is Worth It — or perhaps The Times paid some Madison Avenue logo engineers for that.

And one is prompted to ask: worth what, exactly? If “truth” actually amounts to “lived experience,” as The Times insists, then truth can be whatever you say it is — the bedrock ethos of all tyrannical political movements. To me, The Truth is Worth It sounds suspiciously like The Ends Justify the Means, and anyone following the so-called Resistance the past three years may have noticed that’s exactly how it operates.

For instance, Resistance team captain Elizabeth Warren referred the other day to the 2014 “murder” of Michael Brown in Ferguson Missouri “by a white policeman.” Of course, Ms. Warren was speaking her “truth.” Now, it happens that the US Department of Justice under Eric Holder (this was the Obama administration) determined that it was not murder, as did an inquiry by the State of Missouri — rather that Mr. Brown was shot after attacking officer Darren Wilson in his police car and attempting to grab his gun. 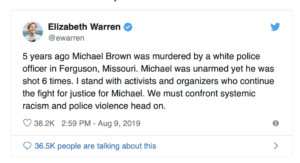 Did Senator Warren not believe former attorney general Holder? Was there some other authoritative opinion she was referencing? Or was she just making shit up on-the-fly to juice an audience? Could she have had any other purpose than to provoke racial animus? Is that what this country needs? More tension between blacks and whites? More reason for suspicion and hatred? Is that where you want leadership to lead you?

Senator Warren’s remark pretty obviously demonstrates the Resistance’s tenuous relationship with reality. Her rival, Sen. Kamala Harris tweeted out substantially the same thing last Friday. Do they actually believe what they are saying, or is it simply a tactical move because it’s worth it to stir up racial animosity if you want to become president? The media gave both of them a pass on that ploy. 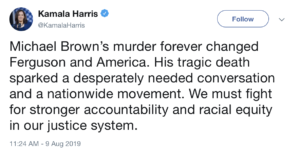 A few weeks ago, podcaster Dave Rubin had “spiritual teacher” Eckhart Tolle on for a chat, and Mr. Tolle made the surprising remark that the current sorrows of the world were due to an excess of yin and not enough yang, meaning, he went on to explain, too much of the female principle in operation and not enough of the male principle. This crack made Dave Rubin blink a few times, especially coming from the most serene celebrity on the planet, a fellow far less excitable than the Dalai Lama, and a demigod to the yoga pants and Chai tea crowd. Too much yin! He said that? Really?

Mr. Tolle is onto something. Just take, for instance, a recent column by The New York Times’s op-ed writer Gail Collins: How to Torture Trump. Could she have put it more plainly? Does she not sound like a woman who has gotten advice from an unscrupulous divorce lawyer (excuse the redundancy)? In fact, the USA is looking like a really bad marriage. The yin of America is stuck in an hysterical rage at the yang. Cis-men whose lived experience includes marriage may be familiar with this stratagem. The prudent men often opt to not engage with the hysteria, which almost invariably amps up the hysteria. 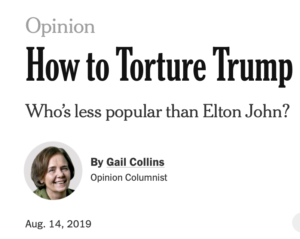 The aim of the national matrimonial hysteria is to make sure that whatever conflict is at issue remains unresolved. The melodrama goes on for its own sake. It’s fun living on the verge of a nervous breakdown. That is exactly why the US political scene is so disordered and distressed. That is why the Democratic Party can’t find any credible male candidates. And that is how come the country happened to elect an imperturbable Golden Golem of Greatness.

One response to “The Yin and the Yang of It, by James Howard Kunstler”