A “Market” That Needs $1 Trillion in Panic-Money-Printing by the Fed to Stave Off Implosion Is Not a Market, by Charles Hugh Smith

The Fed cannot conjure buyers when everyone wants to sell. From Charles Hugh Smith at oftwominds.com:

It was all fun and games enriching the super-wealthy but now the karmic cost of the Fed’s manipulation and propaganda is about to come due.

A “market” that needs $1 trillion in panic-money-printing by the Fed to stave off a karmic-overdue implosion is not a market: a legitimate market enables price discovery. What is price discovery? The decisions and actions of buyers and sellers set the price of everything: assets, goods, services, risk and the price of borrowing money, i.e. interest rates and the availability of credit.

The U.S. has not had legitimate market in 12 years. What we call “the market” is a crude simulation that obscures the Federal Reserve’s Socialism for the Super-Wealthy: the vast majority of the income-producing assets are owned by the super-wealthy, and so all the Fed money-printing that’s been needed to inflate asset bubbles to new extremes only serves to further enrich the already-super-wealthy.

The apologists claim the bubbles must be inflated to “help” the average American, but that claim is absurdly specious. The majority of Americans “own” near-zero assets that earn income; at best they own rapidly-depreciating vehicles, a home that doesn’t generate any income and a life insurance policy that pays off only when they pass away.

The average American uses the family home for shelter, and so its currently inflated price does nothing to improve the household income: it’s paper wealth, and we’ve already seen how rapidly that paper wealth can vanish when Housing Bubble #1 popped. (Housing Bubble #2 is currently sliding toward the edge of the abyss.)

Were legitimate price discovery allowed, the asset bubbles would pop, and the real-world impact on the average household that owns essentially zero income-producing assets would be minimal. Their overvalued house would fall in half, but since it still functions as shelter, the actual economic impact is minimal. As for the life insurance company’s losses–where’s the benefit today of an “asset” that only pays out when you die?

Meanwhile, the super-wealthy own stocks, bonds, companies and commercial real estate, all of which generate income. The rich get richer in two ways: their assets generate small fortunes in income (unearned income is what separates “the rich” from everyone else) and thanks to the Fed’s constant goosing of asset prices, their paper wealth has multiplied.

The dirty little secret that nobody dares whisper lest the whisper trigger a self-reinforcing avalanche is that this Fed-manipulated “market” is illiquid: if any serious selling were to arise, there wouldn’t be enough buyers to stave off a complete implosion of the bubbles.

The Fed’s game is to create the illusion of liquidity by being the buyer of last resort, only now the Fed is the only buyer. This is the toxic consequence of the Fed’s 12 long years of Socialism for the Super-Wealthy: thanks to the Fed’s destruction of price discovery, the super-wealthy no longer worry about liquidity, so leverage is the name of the game.

The Super-Wealthy can gamble with hundreds of billions to stripmine the economy and not worry about whether a buyer will actually pay the overvalued price of the asset, because they can count on the Fed to step up and panic-money-print whatever sums are needed to maintain the illusion of liquidity.

Why has the Fed been forced to panic-money-print $1 trillion to stave off an implosion of their phony “market”? Moral hazard is coming home to roost, and the Fed is having a full-blown panic-attack because the Super-Wealthy (banks, corporations, financiers) have no fear that liquidity could dry up and markets go bidless, i.e. buyers disappear and there’s nobody left to buy their overvalued assets at bubble valuations.

If you want to understand how liquidity can dry up overnight and bids disappear, please read Mandelbrot’s book The Misbehavior of Markets: A Fractal View of Financial Turbulence. The point Mandelbrot makes here is that markets are intrinsically unstable and prone to sudden, chaotic turbulence. In a legitimate market with intact price discovery, buyers and sellers understand risk cannot be reduced to zero and so they trade accordingly.

But in our bogus Fed-controlled “market,” buyers and sellers are supremely confident the Fed will always buy assets regardless of price, and so they trade accordingly: There are no limits on leverage, derivative positions, credit lines, stock buy-backs or currency (FX) swaps: the Fed has been reassuring the legalized lootersthat the sky is the limit, go ahead and gamble hundreds of billions of dollars, we’ll buy your overvalued assets if things get dicey.

And so the tissue-thin “market” is fundamentally illiquid, and hence the Fed’s sudden panic-money-printing of $1 trillion, which is roughly equivalent to the entire GDP of Indonesia.

The Fed’s thorough destruction of price discovery and its elevation of moral hazard have created a monster that is about to devour the Fed’s phony facade of a “market”. It was all fun and games enriching the super-wealthy but now the karmic cost of the Fed’s manipulation and propaganda is about to come due, and few of the “market’s” supremely complacent and confident participants are prepared for the unraveling of the Fed’s illusion of liquidity.

If you want an analogy, try a population of rats that have proliferated on an island, and now the ravenous horde has consumed the last remaining bits of food. You can work out what happens next. 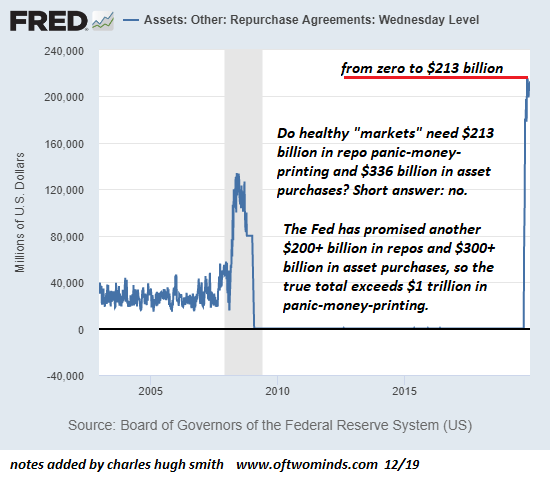 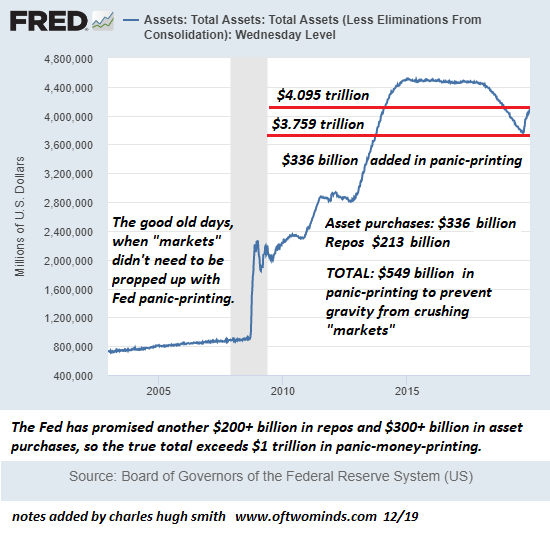 One response to “A “Market” That Needs $1 Trillion in Panic-Money-Printing by the Fed to Stave Off Implosion Is Not a Market, by Charles Hugh Smith”