Sometime soon Trump needs to make a stand against the coronavirus commissars or his chances aren’t looking too good in the election. From David Stockman at lewrockwell.com:

It should be evident by now that the Donald’s one and only north star is his own glorification and self-aggrandizement. That’s why he’s totally flat-footed at this crucial moment in the pandemic saga.

What he needs to be doing is taking off the gloves for a bare-knuckled counterattack against the Virus Patrol, which is ruining America’s economic and fiscal future.

Instead, yesterday he put on the Mask and the tweeted a juvenile boast that he’s the most patriotic muzzle-wearer in the land. Apparently, there is no place the Donald won’t go to reverse his sagging poll results:

We are United in our effort to defeat the Invisible China Virus, and many people say that it is Patriotic to wear a face mask when you can’t socially distance. There is nobody more Patriotic than me, your favorite President! 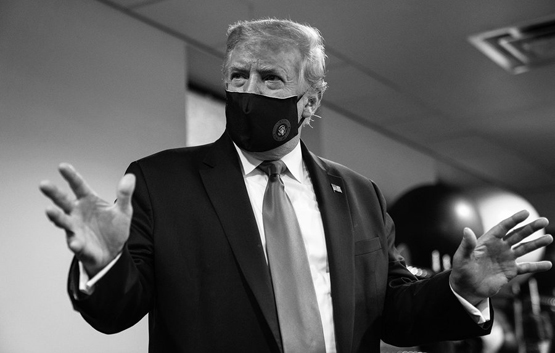 But no, Donald, you ain’t no favorite among lovers of liberty, capitalist prosperity, free market opportunity and the constitutional fettering of state power.

After all, you said you came to Washington to drain the Swamp, yet there is no more odious set of Swamp Creatures than the camarilla of NIH/CDC/FDA doctors and apparatchiks, along with their Big Pharma and Gates Vaccine lobby allies, who bamboozled you into the folly of Lockdown Nation last March.

One response to “Who’s That Masked Man! by David Stockman”