The Insane Leading the Blind, by James Howard Kunstler

Some of those peaceful protesters sure have a lot of weapons. From James Howard Kunstler at kunstler.com: 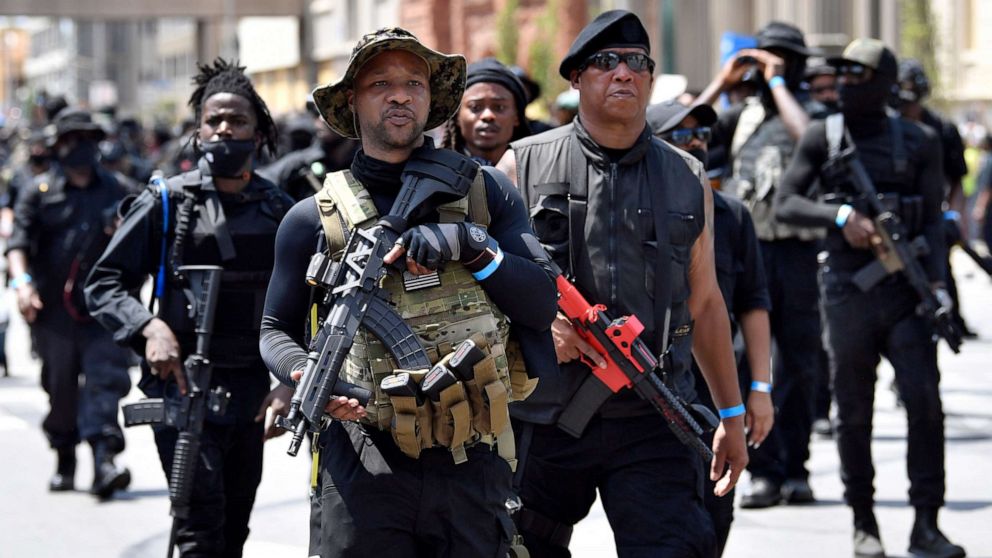 The NFAC warriors on the march, led by Grand Master Jay.

On our way to becoming a nation of hobos, the Democratic Party’s Antifa shock troops brought out the lethal weapons this weekend, hoping to provoke a Kent State 2.0 type bloodbath that would clinch the election for the mummified remains of Joe Biden, currently reposing in his basement sepulcher. How’d that work out?

In Louisville, Saturday, just after lunchtime, the self-styled Not Fucking Around Coalition (NFAC) was mustering for action and “inspecting firearms” (according to NFAC comandanteGrand Master Jay) when one of said weapons accidently discharged and mowed down three NFAC warriors — nicely demonstrating the hazards of fucking around with loaded weapons.

In Austin Saturday night, one feckless BLM mob marcher name of Garrett Foster brought his AK-47 to the street party. When he pointed it at a motorist trapped by the crowd, he got blown away to that great struggle session in the sky, the surprise of his life, I’m sure.

In Portland, OR, police found a bag of loaded rifle magazines and Molotov cocktails in the nearby park that serves as the rioters’ marshaling yard. Portland Mayor Ted Wheeler did not attend the evening’s frolics at the sore beset federal courthouse, having successfully subjected himself to ritual humiliation himself a few nights earlier. After midnight Sunday, police declared the Antifa actions “a riot” and made a few arrests.

Up Seattle way, a federal judge struck down the city council’s order against police using tear gas and pepper spray on rioters just in time for another weekend of rioting. SPD Chief Carmen Best declared, “In the spirit of offering trust and full transparency, I want to advise you that SPD officers will be carrying pepper spray and blast balls today, as would be typical for events that carry potential to include violence.” Hours later, after Antifas smashed the windows of ground-floor businesses, set fire to a construction site, and trashed the SPD’s East Precinct building, pepper spray and blast balls were deployed and forty-five of the mob were arrested (on rioting, assault, and other charges), while twenty-one SPD officers were injured.

Down in LA, Antifas broke into the federal Bureau of Prisons Detention Center. In Richmond, VA, rioters set fire to a city dump truck used as a barrier to protect a police station.

So it goes in the insurrection summer of 2020. The nation’s attention is averted from the real action taking place as the economy continues to implode and the US dollar slides on the Forex market — meaning that not only is business failing everywhere, and livelihoods extinguished, but the medium-of-exchange that represents all transactions by any remaining business is accelerating its decline toward the target value: zero. This is unfortunately what comes of the fiscal profligacy prompted by the corona virus crisis, with the Senate poised to introduce another $1 trillion in an emergency assistance spending bill that would reimburse 70 percent of unemployed workers’ lost wages. Over on the House side, Speaker Nancy Pelosi upped the ante to $3 trillion in emergency spending, designed to crater the dollar even faster and, theoretically, assure a Democratic Party victory on November 3 (to govern the smoldering cinder that will be left of the USA).

The counterforce to that lethal inflation is the choking off of capital flows from the tens of millions of mortgages, car loans, and myriad other obligations that can’t possibly be paid in August, September, and October. These tributaries flow into the larger rivers of capital, and when they dry up the entire global banking order may keel over, with those fabled financial weapons of mass destruction, the derivatives, triggering an orgy of counterparty insolvency. When capital stops flowing, you see, money doesn’t just sit there, it vanishes. The question is: can it disappear faster than fiscal policy-gone-wild can summon fresh money into existence? I guess we’ll find out.

The world has gone broke before — the Dark Ages, the Plague Years, the Thirty Years’ War, the Great Depression — but never broke like this, or this badly, or had so many people in it who were going to suffer from being broke. The Antifas on the streets of Portland, Seattle, and elsewhere probably don’t have collateralized loan obligations and other financial esoterica on their minds, but these things lurk somewhere in the collective subconscious behind the nihilism they’ve fallen into these brutal dog days of summer as the insane lead the blind.

One response to “The Insane Leading the Blind, by James Howard Kunstler”