Now Is The Time For Americans To Rebel Against Lockdowns, Mask Laws And Forced Vaccination, by Brandon Smith

Actually it was time to rebel against all of the above about eight months ago, but better late than never. From Brandon Smith at alt-market.us: 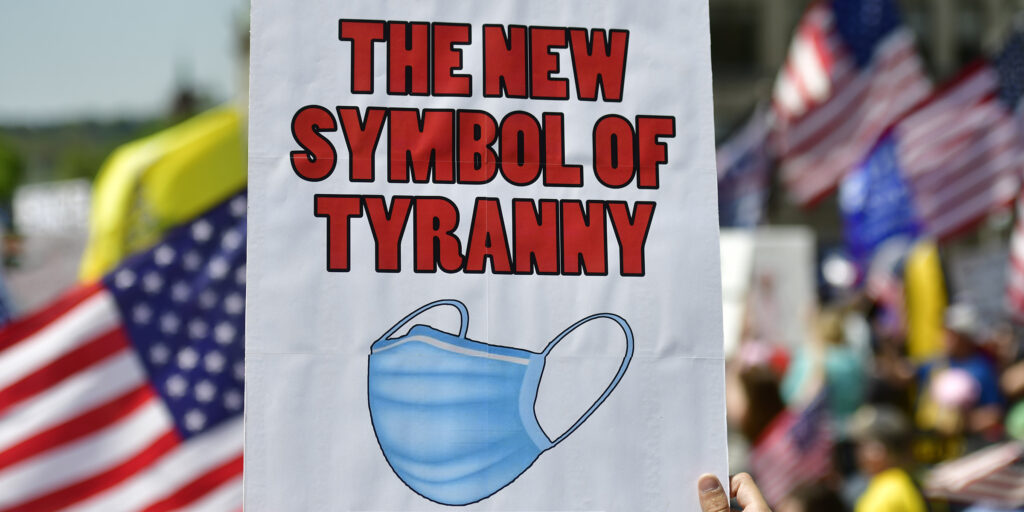 With the presidential election highly contested and the mainstream media hyping the rising infection numbers, the public is now facing important questions regarding the future of the pandemic response. Some states have decided to unilaterally introduce “executive orders” to restrict citizen movements, business openings and public activities.

Anthony Fauci is on the news constantly, calling for families to cancel Thanksgiving and Christmas and telling Americans to just “do what we are told”. The media is generally trying to drum up fear in the minds of the populace and paint images of plague and death everywhere. If Biden does actually end up in the White House, a federalized and national high level lockdown is on the table starting in January.

In April of this year I published an article titled ‘Waves Of Mutilation: Medical Tyranny And The Cashless Society’, which outlined a social engineering model put forward by globalists at MIT and the Imperial College of London which I called “wave theory”. The model essentially works like this:

Governments must use the pandemic as a rationale for “waves” of restrictive lockdowns, followed by controlled re-openings of the economy and of normal human activity. Globalists claim that this will “slow” the spread of the coronavirus and save lives. However, they also openly admit that these cycles of closures and openings have other uses.

Over time, the citizenry becomes acclimated to governmental intrusion in their everyday lives, and they get used to the idea of bureaucracy telling them what they are not allowed to do when it comes to the simplest activities. The system thus bottlenecks all human interactions to the point that we are constantly asking for permission. We become slaves to the Covid response.

As globalist Gideon Lichfield from MIT stated in his article ‘We’re Not Going Back To Normal’:

“Ultimately, however, I predict that we’ll restore the ability to socialize safely by developing more sophisticated ways to identify who is a disease risk and who isn’t, and discriminating—legally—against those who are.

…one can imagine a world in which, to get on a flight, perhaps you’ll have to be signed up to a service that tracks your movements via your phone. The airline wouldn’t be able to see where you’d gone, but it would get an alert if you’d been close to known infected people or disease hot spots. There’d be similar requirements at the entrance to large venues, government buildings, or public transport hubs. There would be temperature scanners everywhere, and your workplace might demand you wear a monitor that tracks your temperature or other vital signs. Where nightclubs ask for proof of age, in future they might ask for proof of immunity—an identity card or some kind of digital verification via your phone, showing you’ve already recovered from or been vaccinated against the latest virus strains.”

3 responses to “Now Is The Time For Americans To Rebel Against Lockdowns, Mask Laws And Forced Vaccination, by Brandon Smith”