If Trump were a Democrat, the capitol insurrection would have been a righteous protest against injustice and all manner of other bad things. You’ll have to go directly to the linked article to view the video mentioned in the article excerpt here. From Peter Brimelow at unz.com:

VDARE.com Editor Peter Brimelow was not at the January 6 Patriot protests at the U.S. Capitol, just as he was not at the 2017 Charlottesville Unite The Right Rally (although PayPal cut VDARE.com off anyway).

But afterwards, on January 15, he tweeted: 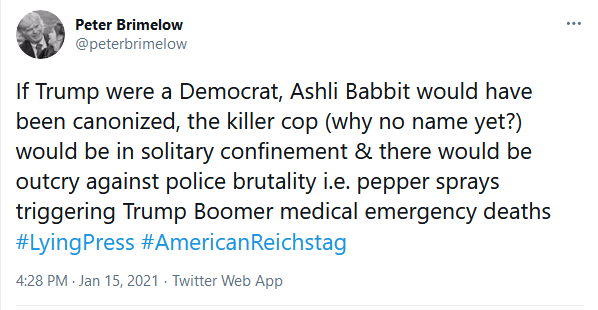 He was right. We’re going to show here that quite enough video footage exists to make that case.

It’s just that our Lying Press doesn’t want to make it.

Let’s start off by saying that, if Trump were a Democrat, the Lying Media would be pointing out that

Anti-Kavanaugh feminists did it in 2018. And Democrats applauded them.

Hundreds were arrested for invading the Capitol, including comedienne Amy Schumer, a relative of New York Senator Chuck Schumer.

But we can find no reports that anyone was seriously punished—least of all Amy Schumer.

Labor union activists invaded the Wisconsin State Capito l in 2011–and stayed for a month. Again, Democrats applauded them.