The Cost of the Jab(s), by Eric Peters

Probably the most charitable explanation for the massive push to get a Covid-19 vaccine is that it’s making a lot of people a lot of money. From Eric Peters at ericpetersautos.com:

Health insurance and car insurance being the prior examples – and precedents.

Both used to be on offer for those who wished to freely buy them. When that was the case, many people didn’t – for many reasons but all of them coming down to a calculation that it wasn’t worth it, to them. The cost of the insurance vs. the cost of not buying it. The result of this option was that the cost of insurance was less – for everyone – precisely because of the pressure on the sellers of insurance to offer it at prices low enough to make enough people want to buy it.

Better to force everyone to buy it.

That takes a lot of pressure off those “selling” it – whatever it is. How do you bargain for a deal when they make you an offer you can’t refuse?

There may or may not be some other – much more sinister – motive at work or even unanticipated consequence behind or resulting from the mass-jabbing campaign currently under way, which has supplanted the mass Diapering campaign that made way for it. There can be little doubt that Diapering was conditioning. To get people acclimated to doing what they are told to do – period. No matter how palpably absurd or degrading and (indeed) for precisely those reasons as getting them to obey palpably absurd and degrading orders conditions them to obey any orders – now and going forward. 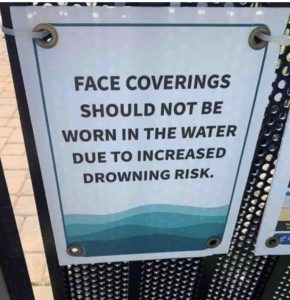 2 responses to “The Cost of the Jab(s), by Eric Peters”