The progressive civil war over Syria and Assad exposes an astonishing lack of intellectual curiosity by some on the American Left, by Scott Ritter

The left has accepted without question the government’s narrative on Syria and Assad, notwithstanding it’s gaping holes and contradictions. From Scott Ritter at rt.com: 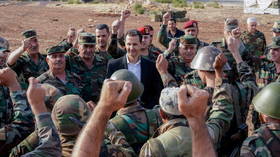 Anyone following Aaron Maté (149K followers on Twitter); The Young Turks (TYT, with 440K followers as an institution, and as many followers each tracking the activity of co-hosts Cenk Uygur and Ana Kasparian); the comedian Jimmy Dore (274K followers); or any number of other Twitter personalities whose online paths have crossed with any of the above; knows these left-leaning social media stars have been engaged in a vicious feud. Full disclosure, I have appeared on both Maté’s podcast, Pushback, as well as The Young Turks radio show. At issue is Syria and, more pointedly, the contention by both Uygur and Kasparian that Maté is shilling for President Bashar Assad.

A tale of two narratives

The sheer drama and vitriol which has emerged as a result of this feud has been entertaining for those who get a kick out of leftwing internecine warfare. Maté’s use of Jimmy Dore’s popular online program The Jimmy Dore Show as a platform for promoting his arguments has torn the scab off old wounds created when Dore left The Young Turks and struck out on his own, appears to underpin at least some of Uygur and Kasparian’s anti-Maté invective. However, more interesting is the fact that, as Maté pointed out in a recent interview with The Hill, the progressive wing of the American Left has hit a brick wall over the issue of Syria. Criticism of Assad has run up against the lies used to sustain US military hegemony in the Middle East.

“I think,” Maté noted, “that that meltdown reflects just like a general hostility they [The Young Turks] have towards people who are upholding actual progressive values and upholding actual journalism standards.” While the smear campaign waged by Uygur and Kasparian has been as unconscionable as it has been factually wrong, the fact that there is controversy among the progressive wing of the American political Left should not surprise anyone.As Maté observed, “[t]he reason why they slandered me at that time is because I was in Syria and Syria is a, you know, touchy subject for many people on the Left. It has been divisive.”