“At Risk” by Eric Peters

Now comes news that the CDC has promulgated guidelines for the establishment of places where “at risk” people are to be  – let’s use the historically apt term – concentrated.

Naturally, “at risk” has a very different meaning than most people imagine. It does not mean people who are sick, or elderly or immune-system-compromised, though concentrating anyone was something previously unimaginable in America – before it became a “homeland,” at any rate.

It means – it will mean – people who have refused to be Needled. They will be styled “at risk,” despite being perfectly healthy – as well as a threat to the health of others. And then be concentrated – for their safety.

Just as the perfectly healthy were presumed “asymptomatic” spreaders – and forced to wear a medically useless “mask” and are now being forced to wear them, again.

Dragooning anyone into a detention center who has not been convicted of some criminal offense, at the conclusion of due process – including the formal presentation of specific charges that must be proved beyond a reasonable doubt, in  accordance with the law – is something that didn’t used to happen in America. 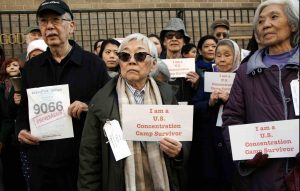 There was of course the disturbing – and largely forgotten – precedent set during World War II, when Americans who happened to be of Japanese ancestry were  Hut! Hut! Hutted! from their homes and into concentration camps, where they were kept prisoner for years. This was justified on the basis of racial collectivism, the conception  that every person of Japanese ancestry was sympathetic to the Empire of Japan and thus a potential if not actual enemy agent.