There’s something to be said about not worrying about the things you can’t do anything about and enjoying life a bit. From Ray Jason at theburningplatform.com: 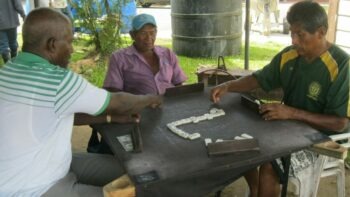 Years ago, I nick-named this modest little spot The Domino Triangle. It was too tiny for an actual building, so a tarp had been slung to provide shelter from the sun and the rain. Beneath it was a folding card table and some battered chairs, where the locals would play dominoes.

When the tropical heat would begin to lessen in the late afternoon, the men would start gathering. They arrived with beer and a little pocket money. They also brought something that is increasingly rare in our modern world – modest, earth-bound happiness.

Their conversations revolved around the elemental concerns of bedrock Humanity – too much work and not enough pay, the entertaining inscrutability of wives and girlfriends, and the follies of their grandchildren. Nobody was discussing how many pixels the next iPhone camera would have or the volatility of Bitcoin.

I often stopped and watched them play. In dark moments, when the melancholy was heavy on me, it reassured me to realize that scattered all around our troubled planet at this very instant, there were millions of other people laughing and teasing as they shuffled the tiles for the next game.

But aside from the relaxed playfulness and friendship that permeated this simple triangle, there was something else in play here that I had been trying to unravel for a long time. The other day, when someone unexpectedly had to leave the table, the men asked me if I wanted to play. When I told them that I didn’t know how, they offered to teach me. One of them joked that it probably wouldn’t be a very expensive lesson. Another laughed and asked me how much money I had in my wallet.