Evergrande Bonds Halted Amid Liquidation Panic As Contagion Spreads To Other Chinese Junk, by Tyler Durden

Evergrande is a giant property development company in China and financially it is on its last gasps before it is underwater. If it goes under the reverberations will be global. From Tyler Durden at zerohedge.com:

With algos busy chasing upward momentum in futures and global stocks, the biggest – if largely ignored story – remain the ongoing collapse of “China’s Lehman“, the $300+ billion China Evergrande, where following our earlier reports (see below) that a bank run  emerged among creditors of the biggest and most indebted Chinese developer as its bonds were no longer eligible collateral in the repo market after a ratings downgrade, on Monday the rout went from bad to catastrophic as various Evergrande bonds crashed amid a liquidation frenzy, prompting China’s stock exchanges to halt trade. 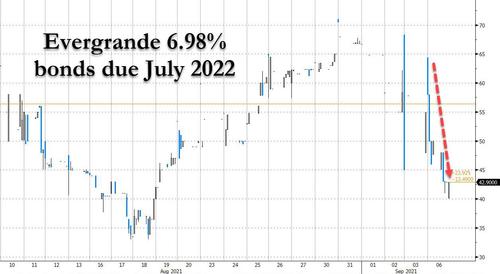 Shanghai exchange data showed the bonds sliding more than 25% to a low of 40.18 yuan after the resumption of trade on Monday afternoon. The company’s 5.9% May 2023 Shenzhen-traded bond , which was also suspended, fell more than 35% after trading resumed. China Chengxin International Credit Rating Co (CCXI) downgraded Evergrande and its onshore bonds to AA from AAA on Thursday, and placed the company and its bonds on a watchlist for further downgrades, effectively freezing the company out of the repo market.