Nobody expects the media not to have its biases, but they’re not even getting basic facts right. Exhibit A: the Kyle Rittenhouse trial. From Jonathan Turley at USA Today via zerohedge.com:

In our age of rage, Rittenhouse had to be convicted to fulfill the narrative. Acquittal has to be evidence of a racist justice system. 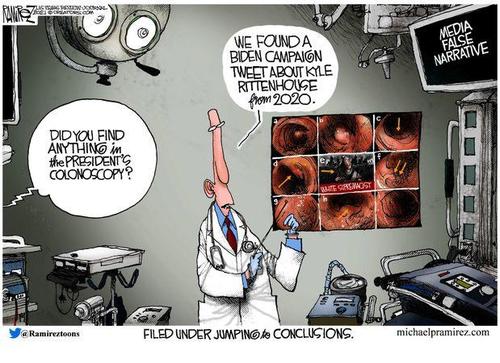 The full acquittal of Kyle Rittenhouse is now in. The result was hardly a surprise to many of us who watched the trial rather than the media coverage. The jury spent days carefully considering the evidence and could not find a single count that was supported beyond a reasonable doubt.

In rendering its verdict, the jury fulfilled its core function in our legal system. The jury was designed to protect an individual from becoming the grist of a criminal justice system. As the Supreme Court noted in Duncan v. Louisiana (1968):

“Providing an accused with the right to be tried by a jury of his peers gave him an inestimable safeguard against the corrupt or overzealous prosecutor and against the compliant, biased, or eccentric judge.”

The American jury is designed to stand between the mob and a defendant; between the government and the accused.

The thin line of a dozen citizens can prove the most unassailable wall for justice in our system.

There was, however, a second verdict in that courtroom for those who have been maintaining a distorted or incomplete account to this trial. From the outset, politicians and media figures insisted that this was a case of murders committed by a white supremacist. Then-presidential candidate Joe Biden labeled Rittenhouse a “white supremacist” in a tweet showing his photo and demanded to know why then-President Donald Trump did not “disavow white supremacists.” Much of the media followed suit with an echo chamber of coverage that led some people to believe that these were essentially executions on the streets of Kenosha.  Columnist Elie Mystal called the trial a sham.