Having turned California into a third-world country, California’s governor is upset that Los Angeles rail yards look like a third world country. From Tyler Durden at zerohedge.com:

Having shrugged off ‘mostly peaceful’ protests and reclassifying nonviolent felonies like shoplifting and drug possession as misdemeanours, it appears the increasingly progressive policies of Soros-sponsored DAs – especially in California – have come back to bite as a tsunami of violent crime has forced woke liberal leaders to face up to the reality that their voters (and more importantly donors) are facing every day.

California Gov. Gavin Newsom and his left-leaning comrades in the Golden State spearheaded the move to reform police departments and the state’s criminal justice system that allows people who shoplift or are in possession of drugs to be released from jail (or avoid it all together) with minimal consequences for their actions.

Newsom’s acquiescence to ‘progressive’ DAs has single-handedly transformed numerous metros areas into hot spots for violent crime, resulting in businesses and people packing up their bags and getting the heck out of dodge.

For the longest time, progressives have denied their social policies contributed to the rise in violent crime.

But that is changing fast. Along with NYC’s new mayor demanding federal aid to deal with that city’s crime wave, it appears Newsom’s statements about the wave of freight train looting in Los Angeles are very suggestive that his party is quickly recognizing their ‘law and order’ policies are miserably failing. 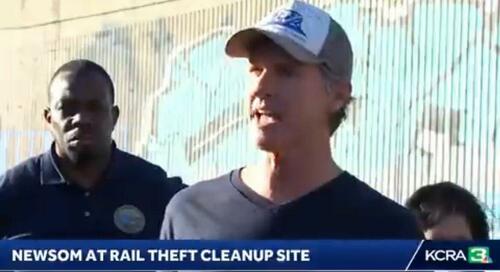