Update on US Dollar as Global Reserve Currency and the Impact of USD Exchange Rates & Inflation, by Wolf Richter

The dollar has been losing market share of international trade for years and that may continue. However, keep telling the world that dollar reserves  are no longer safe and the decline may be dramatic and sudden. From Wolf Richter at wolfstreet.com:

Dollar drops to lowest share in 26 years. Slowly but surely?

The global share of US-dollar-denominated foreign exchange reserves fell by 40 basis points from Q3 to 58.8% in Q4, setting a new 26-year low, edging out the low in Q4 2020, according to the IMF’s COFER data released at the end of March. Dollar-denominated foreign exchange reserves consist of Treasury securities, US corporate bonds, US mortgage-backed securities, and other USD-denominated assets that are held by foreign central banks and other foreign official institutions. 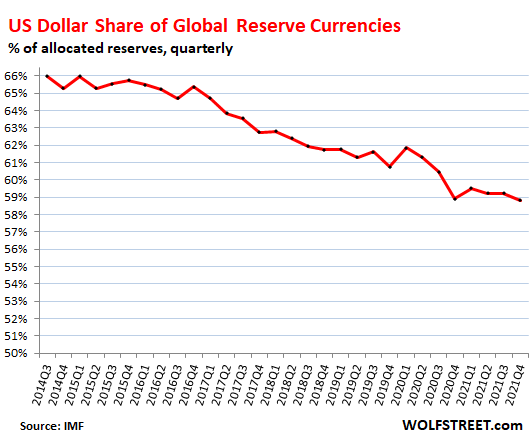