Interest rates are going up, and given the long swings in the bond market, they’ll probably be going up for many years. From Nick Giambruno at internationalman.com:

Although many don’t realize it, interest rates are simply the price of money.

And they are the most important prices in all of capitalism.

They have an enormous impact on banks, the real estate market, and the auto industry. It’s hard to think of a business that interest rates don’t affect in some meaningful way.

Today, we are on the cusp of a rare paradigm shift in interest rates. Such changes take decades—or even generations—to occur. But when they do, the financial implications are profound.

Interest rates rise and fall through decades-long cycles, as seen in the chart below.

That makes sense, as debt is naturally cyclical. It allows people to consume more than they produce now. But it also forces them to produce more than they consume later to pay it off.

The red line marks the long-term average of 5.6%. 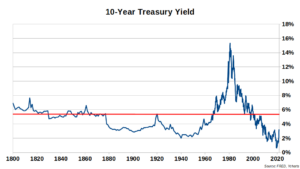