Debt… And Why The Fed Is Trapped, by Lance Roberts

The Fed is walking a tightrope between hyperinflation and a Greater Depression. From Lance Roberts at The Epoch Times via zerohedge.com:

The massive debt levels provide the single most significant risk and challenge to the Federal Reserve. It is also why the Fed is desperate to return inflation to low levels, even if it means weaker economic growth. Such was a point previously made by Jerome Powell:

“We need to act now, forthrightly, strongly as we have been doing. It is very important that inflation expectations remain anchored. What we hope to achieve is a period of growth below trend.”

That last sentence is the most important. 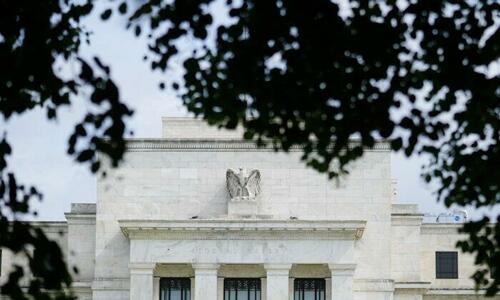 There are some important financial implications to below-trend economic growth. As we discussed in “The Coming Reversion to the Mean of Economic Growth“:

“After the financial crisis [of 2008–09], the media buzzword became the ‘new normal’ for what the post-crisis economy would be like. It was a period of slower economic growth, weaker wages, and a decade of monetary interventions to keep the economy from slipping back into a recession.

“Post the ‘COVID crisis,’ we will begin to discuss the ‘new new normal’ of continued stagnant wage growth, a weaker economy, and an ever-widening wealth gap. Social unrest is a direct byproduct of this ‘new new normal,’ as injustices between the rich and poor become increasingly evident.

“If we are correct in assuming that PCE [Personal Consumption Expenditures price index] will revert to the mean as stimulus fades from the economy, then the ‘new new normal’ of economic growth will be a new lower trend that fails to create widespread prosperity.”