An Economic Candle Burning From Both Ends, by Jeffrey Tucker

The past often dictates the future. It’s no longer a question of if the economy collapses, only when. From Jeffrey Tucker at The Epoch Times via zerohedge.com:

Some facts of our times follow. As you read, consider your own household and portfolios and how they measure up.

Disposable personal income per capita has been in decline in real terms for 19 straight months. This is not just dollar amounts but dollars adjusted for purchasing power. We are just now level with 2019, which is to say that Americans have lost three years of financial progress.

Savings has hit a new low of 3.2 percent, which is where it stood just after the 2008 financial crisis, and this contrasts with 6 percent rates after 1980 and 10 percent average rates in the postwar period.

Credit card debt just jumped to a 20-year high and is still soaring. 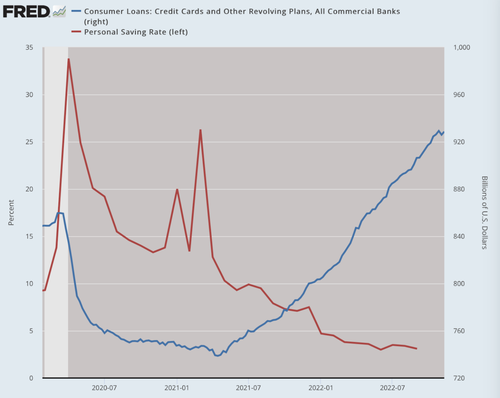 Money, credit, and capital are draining from long-term investments, drying up the venture capitalists and putting a tight credit squeeze on large businesses where firings in the professional sector have already begun.

Inflation is still embedded and this is because consumers have come to expect it and adjust their spending habits accordingly, plus wage costs are rising in sectors like hospitality, retail, and manufacturing.

As an example, the latest housing-price data shows annualized inflation at 15.4 percent year over year, even as the buyers’ market is mostly locked up. That’s the very essence of stagflation: rising prices amidst declining output.