How Big Are the Fed’s Losses and Where Can We Go See Them?

You wouldn’t think an institution that can legally print money would lose money. From Wolf Richter at wolfstreet.com:

We find a good rubbernecking spot.

We find a good rubbernecking spot.

By Wolf Richter for WOLF STREET.

A collapse-chart has been making the rounds in the social media, financial blogs, and the like. It’s being handed around without context, as if self-explanatory, sort of like, look, the world is collapsing. It’s from the St. Louis Fed’s data depository. The title of the chart says, among other things, ominously, “Liabilities: Remittances Due to the U.S. Treasury.” Whatever this is, it’s violating the WOLF STREET dictum, “Nothing Goes to Heck in a Straight Line.”

But beyond the funny aspects of the chart, there is something happening on the Fed’s balance sheet that is taking on momentum and heft: How much money the Fed is losing, where this lost money shows up, and how it derails a taxpayer gravy-train. The chart reflects that in a bizarre manner — it does a switcheroo — that we’ll get to in a moment. 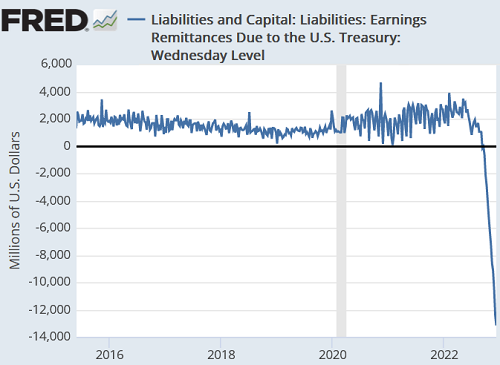 It has a negative balance of -$13.2 billion as of the Fed’s weekly balance sheet released yesterday. On a balance sheet measured in trillions, this is pretty small. But it’s going to get a lot funkier.