The Coming Financial Attack on the United States: Connecting the Dots, by John Wilder

It can’t be denied that the US financial system is frighteningly exposed to attack from enemies foreign and domestic. From John Wilder at wilderwealthywise.com:

“It’s just crazy, you know? Everyone’s affected by it. It’s like all the money just vanished.” – South Park 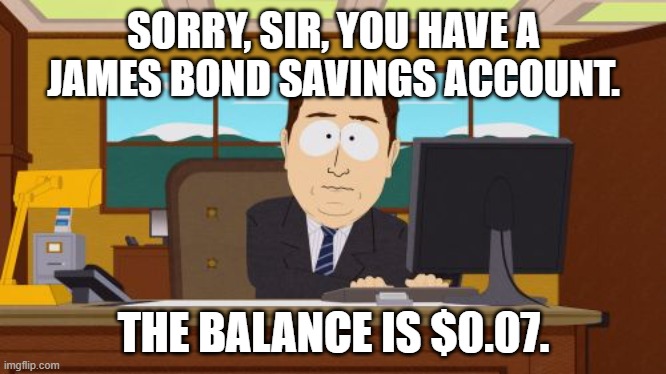 As I’ve mentioned before, Pa Wilder was a banker at a small-town bank that mainly served small farmers.  I can recall (in one of my earliest memories) that a savings account was opened for me.  This account was fairly small in the amount of money that was in it, but Pa made me go to the teller and deposit the money that I had earned.

I had earned the money in the most Wilder way possible:  by being five and being completely un-babysittable.  Ma Wilder needed to go in to help Pa out at the bank and train someone so she could stay home and keep the 3’10” (34 liter) rodeo clown she lived with (me) in line.  Apparently, I was against this plan, because I ran off at least two babysitters in as many days.

Even then, I was difficult to get along with.

At the time, Ma and Pa offered me $20 per week if I would just be good, come home from school and watch re-runs of Star Trek®, and not burn the house down in the three hours between when I got off the bus and when Ma Wilder got home.  Even as a kid that sounded like a good deal to me.  I could try to burn the house down after Ma got home just as easily as when she wasn’t there.  I call that a win-win.

When Ma and Pa paid up, I was owed the princely sum of $100.  Pa Wilder took me down to the bank, and they opened a savings account for me.  I received a savings “passbook,” which was a little book where the teller wrote down my deposit, and then wrote it down on a corresponding card that showed how much money I had in the bank and had my account number on it.

Of course, I then announced that I was moving out.  I figured I could live for quite a while on $100.  When Ma then described exactly how many loaves of bread that would buy, I did the math and decided I wouldn’t run away just yet.