The Tall Ship and the Substitute Teacher, by Ray Jason

A seafaring man rocks the boat. From Ray Jason at theburningplatform.com: 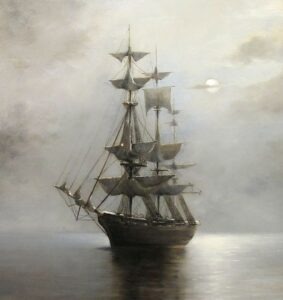 The bartender gave me his nod that indicated something interesting was headed our way. I turned and watched as an old, but impeccably maintained wooden dory, approached the dock. At her oars were four attractive young people – two women and two men. In her stern was the Captain. I assumed this because he had the calm, confident air of one familiar with the joys and ordeals of command. He cordially said good-bye to his oarsmen and joined us at the bar.

“I’ll go out on a topsail yard and guess that you are from the tall ship anchored out there.”

“Indeed, I am. And I must say that this place looks as pleasant as my scouting party described her to me.”

“Are you saying that “Semester-at-Sea ships are now teaching waterfront bar reconnaissance as part of their curriculum?”

“It’s not a formal course, but it fits nicely into the Life Skills category. But they outdid themselves. Not only did they find a spot with the front on the water, but ALL SIDES are on the water. She is a genuine floating bar.”

The new world order and global reset don’t seem to be proceeding as smoothly as planned. From Jeff Thomas at internationalman.com: 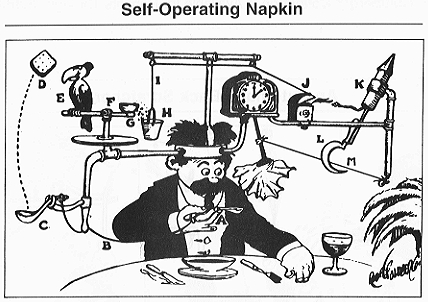 In the 1930s, cartoonist Rube Goldberg became famous for designing machines that sought to fulfill a task, but did so in such a complex way as to be utterly ridiculous and, very possibly, unworkable.

Governments, of course, are Rube Goldbergs on steroids. They have a penchant for making any task absurdly complicated, expensive and, ultimately, dysfunctional.

Whilst this is the norm in any era, we’re presently living through a period that’s becoming overwhelmingly confusing worldwide. The governments of the First World countries are pushing a whole series of mismatched agendas all at the same time. They seek to present a uniform objective, but even they cannot manage much consistency of purpose. Although all of the First World countries (US, UK, EU, Canada, Australia, New Zealand, etc.) are fully on board, there’s no real match-up in their game plan, or even their statements as to what the end goals are meant to be.

There are several main themes: the purported evil of the Second World leaders and the need for First World aggression toward them, even though no one on the other side seems to want to engage. The reinvention of society in which basic truths are turned on their heads and replaced with new, often ridiculous “truths” that no one seems to fully understand, even when they’re rabidly promoting them.

The Next Phase of This Fake Pandemic Will Be Premeditated Mass Murder by ‘Vaccine’, by Gary D. Barnett

Will mass murder be an undisclosed side effect of the vaccines? From Gary D. Barnett at lewrockwell.com:

The stage is set, the plan is in place, and the people are still asleep. The realization that this state has declared war on the American people is unknown to most, and when the killing reaches high levels, the sheep will be told it is due to a mutated virus variant, and it is their fault for not being injected quickly enough with a poisonous ‘vaccine’ administered by this same criminal state. Make no mistake about it; you are the enemy of the state in this war against mankind. This manufactured pandemic began with lies, and was perpetuated by mass propaganda; so much so as to cause extreme fear and panic out of thin air.

This is what real domestic terrorism looks like, and it is being executed by the United States government under the control of its masters in banking, finance, and corporate America; those at the top of the pyramid of power that make up the Council on Foreign Relations, the Trilateral Commission, the Bilderberg Group, and all the major players in science, technology, the mainstream media, medicine, and the pharmaceutical industry. This long-planned plot to depopulate the earth and take total control over all of us could be considered ingenious but for the fact that it is pure evil.

What has been foretold and what is coming is what I would refer to as crisis management terrorism. There will be (and has already been) one fake crisis after another, all claimed to be so important and deadly as to cause the government to step in to control all aspects of human life through law, mandates, and lockdowns, with enforcement implemented at every level from the executive branch of federal government down to state and local health administrators. This will be in essence, a total and saturated form of enforcement with little if any ability of escape. This is by design of course, so that regardless of location or isolation, all will be subject to the propaganda and the long reach of peer pressure and tyranny.