Let’s see how far this goes. From Tyler Durden at zerohedge.com:

Following an extensive three-year investigation into Rep. Ilhan Omar by investigative journalist David Steinberg, a House ethics complaint has been filed by Judicial Watch calling for a probe into potential crimes committed by Omar and her brother. 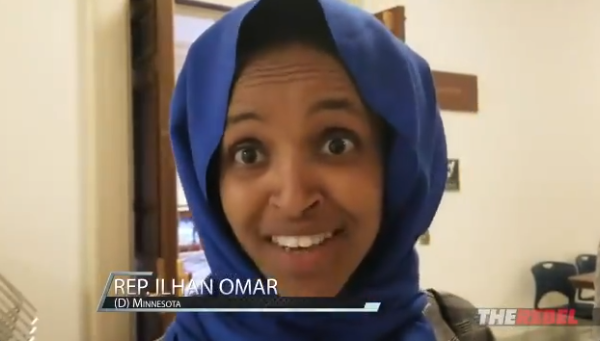 According to the complaint, “Substantial, compelling and, to date, unrefuted evidence has been uncovered that Rep. Ilhan Omar may have committed the following crimes in violation of both federal law and Minnesota state law: perjury, immigration fraud, marriage fraud, state and federal tax fraud, and federal student loan fraud.”

“The evidence is overwhelming Rep. Omar may have violated the law and House rules.  The House of Representatives must urgently investigate and resolve the serious allegations of wrongdoing by Rep. Omar,” said Judicial Watch president Tom Fitton. “We encourage Americans to share their views on Rep. Omar’s apparent misconduct with their congressmen.”

In Defense of Ilhan Omar, by Dave DeCamp

Ilhan Omar is not everyone’s cup of tea, but she actually makes some good points if you look at what she has actually said. From Dave DeCamp at antiwar.com:

President Trump held a rally in North Carolina on Wednesday after a week of criticizing certain freshman members of Congress, drawing much media attention. Of course, the cries of racism from the left are nothing new to hear, but in specifically targeting Rep. Ilhan Omar (Dem-Minn) the president hit a new low. Omar needs to be defended. Despite what you think of her domestic policy, she has been one of the most consistent antiwar voices in Congress.

When Trump brought up Omar the crowd started chanting “send her back.” As disgusting as that chant is, it’s no surprise to hear at a Trump rally. Xenophobia is nothing new from Trump or his base. it’s what he built his campaign on. But Just calling Trump “racist” doesn’t work, the Democrats should have learned this from the 2016 election. What needs to be addressed is the falsehood of Trump’s claims against the congresswoman.

Trump started his attacks on Omar during the rally with, “Representative Omar blamed the United States for the terrorist attacks on our country, saying terrorism is a reaction to our involvement in other people’s affairs.” The crowd responded with boos, clearly not educated on Osama bin Laden’s motives for the attacks on September 11th.

Bin Laden’s 1996 fatwa was entitled “Declaration of Jihad Against the Americans Occupying the Land of the Two Holiest Sites. (Expel the infidels from the Arab Peninsula).” Bin Laden’s jihad against the US started because we were occupying his holy land (a point this author has been making a lot lately).

Even George W. Bush’s Deputy Secretary of Defense Paul Wolfowitz admitted in 2003 that US troops in Saudi Arabia had “been Osama bin Laden’s principal recruiting device.” It doesn’t seem like President Trump learned this lesson of history. The US is preparing to send 500 ground troops to Saudi Arabia amid tensions with Iran, two US defense officials told CNN (although it has not been formally announced). Of course, if Omar criticizes this move the president will probably use it as proof that she is “pro al-Qaeda.” But trying to prevent more terrorist recruitment is in the interest of the American people and the troops overseas.

END_OF_DOCUMENT_TOKEN_TO_BE_REPLACED

In Washington polite society you simply don’t talk about the influence of the Israel lobby and its money unless you want to get labelled an anti-Semite. From Eric S. Margolis at lewrockwell.com:

“Tell me who you cannot criticize and I will tell you who is your master”. Attributed to Voltaire.

Saying anything negative about Israel has long been the third rail of US politics and media.  Israel is our nation’s most sacred cow.  Any questioning of its behavior brings furious charges of anti-Semitism and professional oblivion.

I keep in my bookcase a cautionary book, ‘They Dared Speak Out’ written by US senators and congressmen who all lost their positions after rebuking Israel for its mistreatment of Palestinians or daring to suggest that Israel had far too much influence in the US.

Journalists learn this first commandment very early.  Criticize, or even question, Israel at your own peril.   Until recently, we journalists were not even allowed to write there was an ‘Israel lobby.’  It was widely considered Washington’s most powerful lobby group but, until lately, mentioning its name was seriously verboten.

Now, young Democratic stars Tulsi Gabbard, Kamala Harris, Alexandria Ocasio-Cortez and a feisty congresswoman from Minnesota, Ilhan Omar, have suddenly broken the taboo and said what dared not be said: there is too much rightwing Israeli influence and there must be justice for Palestine.

Presidential candidates Bernie Sanders and Elizabeth Warren have come to the defense of Ilhan Omar against the usual charges that she is anti-Semitic.  So have black groups and smaller liberal Jewish groups.  The Democratic Party, that once received half its financial support from Jewish sources, is badly split over the Palestine crisis.  Its old guard is retreating and does not know what to do beyond issuing fiery denunciations of the heretical Miss Omar.  The Democrat Party split comes just at a time when it is trying to bring down President Donald Trump.

Many people seem unaware that Islam is now America’s third largest religion and may soon surpass the number of Jews.  In Canada, Muslims are already the second religion.

Ilhan is not anti-Semitic.  I grew up in New York and New England where vicious anti-Semitism abounded.  I know real anti-Semitism when I see it.  But she is quite right in charging that vast amounts of pro-Israel money have bought Congress and the media.

END_OF_DOCUMENT_TOKEN_TO_BE_REPLACED

Meghan McCain Is A Fake, Blubbering Asshole, by Caitlin Johnstone

Meghan McCain may be more phony and obnoxious than her father. From Caitlin Johnstone at medium.com:

Some traditions say that having children is the same as attaining immortality. In the case of Meghan McCain, the apple certainly didn’t fall far from the warmongering psychopath.

The View is an American morning talk show in which current events are discussed by a panel of women with radically diverse political beliefs ranging from Democratic Party neoconservatism all the way to Republican Party neoconservatism. Within this microscopic Overton window of public discourse, the subject of the House debate over a resolution to denounceIlhan Omar’s criticisms of America’s involvement with the Israeli government came up at the beginning of the show today.

And it made Meghan McCain cry.

It’s supposedly anti-Semitic to say that the Israel lobby has an inordinate amount of influence in Washington and spreads around a lot of money. However, it happens to be the truth and the reflexive “anti-Semitism” is a smear. From Jeff Cohen at counterpunch.org:

Speaker Nancy Pelosi is reportedly still considering a symbolic “show vote” in Congress on an anti-Semitism and “hate” resolution – which would offer all the authenticity and honesty of a Soviet show trial. If Pelosi proceeds, it will prove Rep. Ilhan Omar’s point about the inordinate influence wielded over Congress by the “Israel-right or-wrong”/AIPAC lobby and its power to stifle criticism of Israel.

The anti-Omar resolution, whether mentioning Omar or not, was originated by two Democrats who are among Congress’s most longstanding pro-Israel diehards: Eliot Engel and Nita Lowey. Both endorsed Bush’s Iraq invasion. Both opposed Obama’s Iran nuke deal. Both supported Trump’s move of the U.S. embassy to Jerusalem.

I’m a proud Jew raised in a liberal family that supported civil rights and human rights. My experience growing up during the 1950s and 1960s was typical of many Jewish Americans. Like many Jews with this background, I’ve grown increasingly ashamed of Israel.

For 40 years, Israel has been ruled mostly by a series of right-wing governments – more and more openly racist and abusive of Palestinian rights. It’s not the land of tree-planting, kibbutzim and “a country treating its Arab minority nicely” that we were sold as youngsters.

That’s why a large number of proud Jewish Americans – raised to believe in civil liberties and open discussion – are appalled by the campaign to muzzle Rep. Ilhan Omar, as well as Speaker Pelosi’s role in it. We’re also appalled that human-rights-abusing Israel is virtually off-limits to debate.