City On Fire: Over Half Of LA County Blazes Caused by Homeless, by Jamie Joseph

LA’s huge homeless problem has mushroomed into a big fire problem as well. From Jamie Joseph at The Epoch Times via zerohedge.com:

Los Angeles is set ablaze up to 24 times a day. The cause? Thousands of homeless encampments… 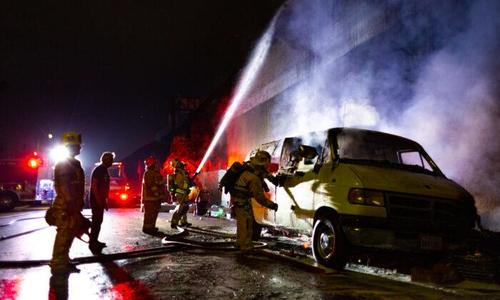 This year, fires started in homeless encampments have accounted for 54 percent of the blazes battled by the Los Angeles Fire Department (LAFD), according to officials—a sharp uptick compared to 2020.

As the county grapples with more than 66,000 people living on its streets, critics are pointing to the growing number of fires caused by the homeless as another indication that officials are mishandling the crisis. And in parts of the city where the homeless are concentrated, residents and business owners say their concerns are not being heard.

“One of our concerns is fires in tents where people experiencing homelessness are sleeping—where they could be injured or even die—and fires that start against a building and spread into the structure,” Scott said.

“Flames from those fires can spread into the brush in wildland areas, or to nearby buildings in urban areas or inside vacant buildings.”

He said potential fire hazards increase significantly on windy days, when the flames can spread rapidly.

“Using open flame to cook in any enclosed spaces, especially tight quarters like tents, can easily catch the tent or belongings inside on fire,” said Scott. In addition, toxic smoke gases can asphyxiate the tent’s occupants, knocking them out or killing them.

LAFD Fire Chief Ralph M. Terrazas recently walked through the Skid Row area in downtown L.A. with representatives from nearby business districts to discuss their concerns about encampments.