The Russians haven’t gone in for a lot of propaganda, perhaps one or two percent of the West’s, they’ve simply accomplished their first objective—separate Luhansk and Donetsk from Ukraine. From Scott Ritter at consortiumnews.com:

No amount of western military aid has been able to prevent Russia from achieving its military objective of liberating the entire territories of both Lugansk and Donetsk as Phase Three begins. 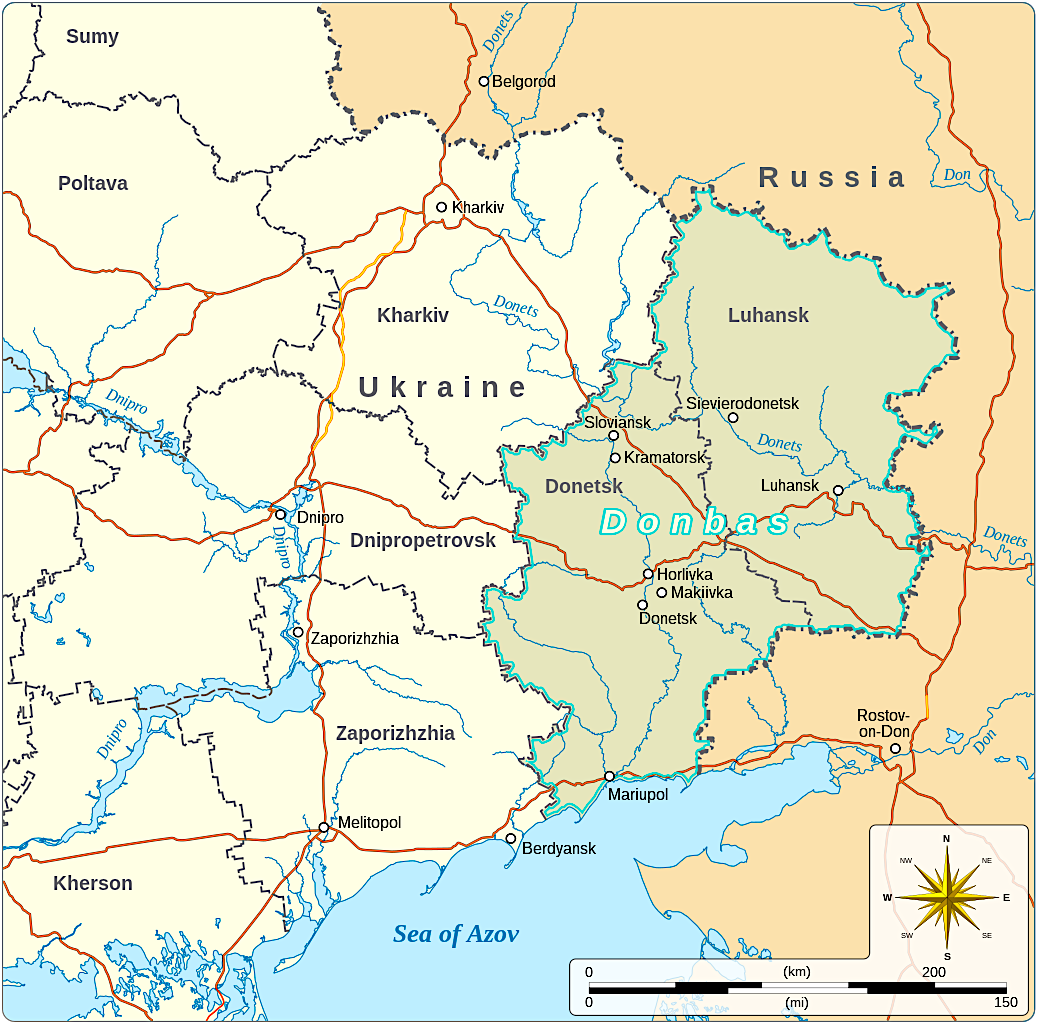 Russia’s “Special Military Operation”, which began on Feb. 24, is entering its fourth month. Despite stiffer than expected Ukrainian resistance (bolstered by billions of dollars of western military assistance and accurate, real-time battlefield intelligence by the U.S. and other NATO members) Russia is winning the war on the ground, and in a big way.

After more than ninety days of incessant Ukrainian propaganda, echoed mindlessly by a complicit western mainstream media that extolls the battlefield successes of the Ukrainian armed forces and the alleged incompetence of the Russian military, the Russians are on the cusp of achieving the stated goal of its operation, namely the liberation of the newly independent Donbass Republics of Lugansk and Donetsk, which Russia recognized two days before its invasion.

The Russian victory in Donbass comes after weeks of intensive combat that saw the Russian military shift gears away from what has become known as Phase One. That was the month-long opening act which, according to Russian President Vladimir Putin in his Feb. 24 address, was tasked with taking “actions throughout the territory of Ukraine with the implementation of measures for its demilitarization and denazification.”

The day Russia’s patience ran out, by Dmitry Orlov

Russia simply got tired of confusion, unfounded accusations, propaganda, double-dealing, and trying to negotiate when the U.S. and NATO had no good faith intention to negotiate. From Dmitry Orlov at saker.is:

Today’s date, commonly written out as 22.02.2022, will be an easy one for future schoolchildren to remember. Various people will remember it in various ways. The residents of Donetsk and Lugansk, the two formerly Ukrainian, now once again Russian cities that have been subjected to conditions bordering on genocide since the US-instigated government overthrow of 2014 will remember jubilantly dancing in the streets, shooting off lots of fireworks, waving Russian flags and hollering the Russian national anthem. For them, this is the day on which new hope arrived that their eight-year nightmare would soon be over and life would finally return to normal.

The badly informed new German chancellor inadvertently helped to resolve the situation by saying that the idea of a Ukrainian-caused genocide in the Donbass is ridiculous. Given the history of the region, the public spectacle of a German leader using the words “genocide” and “ridiculous” in the same sentence made the moment pregnant with possibilities. Here is the information the seemingly rather dim-witted chancellor was missing. There were 9,282 dead on the Donbass side (70% of them civilians) and 114 children. The dead on the Ukrainian side (the Ukrainian troops and various assorted mercenaries that had been attacking and laying siege to the Donbass since 2014) numbered 20,186. This was prior to the renewed Ukrainian shelling of recent days. There were also over two million Donbass refugees in Russia, more than one million in the Ukraine and around 50 thousand in Belarus.

What will NATO do about Russia’s recognition of the Donbass breakaway states? Will it hurt Russia enough to make a difference? From Pepe Escobar at strategic-culture.org:

“You don’t believe in the principle of indivisible security? Fine. Now we dictate the security rhythm.”

History will register that the birth of the baby twins – Donetsk and Luhansk People’s Republics – only a few hours before 2/22/22, was simultaneous to the birth of the real, 21st century multipolar world.

As my columns have stressed for a few years now, Vladimir Putin has been carefully nurturing his inner Sun Tzu. And now it’s all in the open: “Let your plans be dark and impenetrable as night, and when you move, fall like a thunderbolt.”

The thunderbolt was months in the process of being meticulously polished. To paraphrase Lenin, who “created Ukraine” (copyright Putin), we did live many decades in only these past few days. It all started with the detailed demands of security guarantees sent to the Americans, which Moscow knew would be rejected. Then there was the Russia-China joint statement at the start of the Winter Olympics – which codifies not only the strategic partnership but also the key tenets of the multipolar world.

The culmination was a stunning, nearly one hour-long address to the nation by Putin shortly after the Russian Security Council live session deliberating on the request for independence by the DPR and the LPR (here is a condensed version.)

A few hours later, at an emergency UN Security Council meeting, Russian Permanent Representative Vasily Nebenzya precisely outlined why the recognition of the baby twins does not bury the Minsk agreements.

NATO No Longer a Defensive Alliance Is a Tool of Aggression, by Paul Craig Roberts

Today the two eastern Ukrainian territories that constitute the Donbass—Donetsk and Luhansk—announced their independence and Russia shortly thereafter granted diplomatic recognition and said it would move in its military to support the two new nations. The Russians are tired of messing around and there’s very little the U.S. and NATO can do about. This is reminiscent of what Russia did in Syria during the Obama presidency. Two days ago Paul Craig Roberts said Russia would engage in a judicious show of force and it looks like he’s right. This also looks like a masterstroke by Putin and company. From Roberts at paulcraigroberts.org:

It is Amazing: Donbass Russians Are Under Attack from US Trained and Armed Ukrainians and the Kremlin Thinks the Answer is Negotiations

It seems Russia is so averse to using force that she will be pulled into a major war.

The situation is worsening

Jens Stoltenberg, the secretary general of NATO who answers to Washington declared today (Feb 19) at the Munich Security Conference that “if the Kremlin’s aim is to have less NATO on its borders, it will only get more NATO.” He says NATO is beefing up its forces “across the alliance,” that is, in the NATO countries on Russia’s borders. https://www.rt.com/russia/549979-nato-chief-reply-russia/

As if this isn’t enough and with Russia already concerned with the unwillingness of the West to abide by any agreements, treaties, and international law, the president of Ukraine declared today at the Munich Security Conference that Ukraine was on the verge of renouncing the Budapest Memorandum in which Ukraine agreed to abstain from nuclear weapons in exchange for its independence from Russia.  As Ukraine has already broken the Minsk Agreement, there is no reason for Ukraine to keep to the Budapest Memorandum.  https://www.rt.com/russia/549994-ukraine-threatens-renounce-memorandum/

So, Russia goes to the US and NATO and says frankly: “You are making us uncomfortable by putting missile bases on our borders and by your plans to bring Ukraine into NATO.  This is not something we can accept.  Here is our proposal for mutual security.”  And the reply is more NATO military expansion and Ukraine developing nuclear weapons.

There was never any possibility of any success of Russian negotiations with Ukraine, because Ukraine is not a sovereign country and cannot make its own decisions.  Ukraine is Washington’s pawn used to cause trouble for Russia. Russia brought this upon herself by standing aside while Washington overthrew the Ukraine government and installed a Washington puppet.  Biden, Blinken, Stoltenberg, and the rest of the crew have made it completely clear that they intend to make Russia less secure.  The West thinks that this is riskless because all the Russians will do is complain and ask for more negotiations.  Washington has Russia trapped in the self-defeating process of answering Washington’s accusations.