Pelosi, Barrett and the False Face of Strength, by Tom Luongo

There are strong women (Amy Coney Barrett) and there are women who can only pretend (Nancy Pelosi). From Tom Lungo at Tom Luongo.me:

But to make my point I first have to deal with Speaker of the House Nasty Nancy Pelosi’s appearance on CNN.

While Barrett was dealing with the dementia of the Senate Judiciary Committee, Pelosi finally came face to face with strength in the unlikely form of Wolf Blitzer and lost complete control of his Situation Room.

If you watch this entire sequence carefully you’ll note that Blitzer simply held to his point that she wouldn’t answer, why not pass some stimulus bill now and get something done, even if it’s perfect?

Madame Speaker, you have a chance to alleviate suffering and you’re playing politics.

We know what the answer is, because it would allow President Trump a victory on the eve of an election. We know Pelosi is a pure political animal (and her behavior here truly sinks to that level).

But, that’s not what’s interesting, here.

It is how transparent she is about not automatically being allowed to control the conversation to recite her talking points. She obviously feels entitled to the power of Wolf’s platform.

This is hilarious. From Tyler Durden at zerohedge.com: 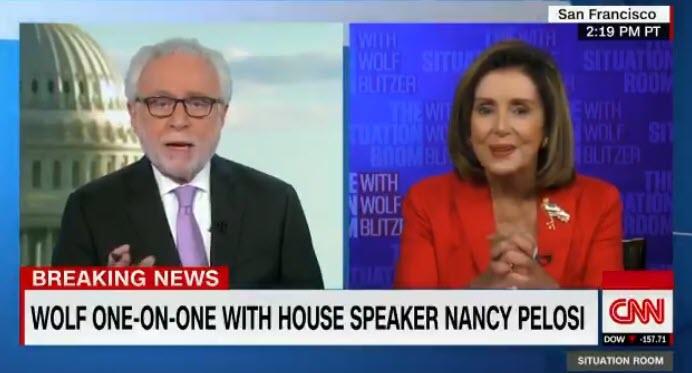 The conversation about why the Democrats refused to accept the $1.8 trillion COVID Relief bill offered by The White House quickly turned ugly when Blitzer brought up the following tweet from one of her own – Democratic Congressman Ro Khanna…

People in need can’t wait until February. 1.8 trillion is significant & more than twice Obama stimulus. It will allow Biden to start with infrastructure. Obama won in 08 by doing the right thing on TARP instead of what was expedient. Make a deal & put the ball in McConnell court. https://t.co/qAEtd049sW

Pelosi grinned awkwardly, then unleashed on the bearded reporter:

“I don’t know why you’re always an apologist and many of your colleagues are apologists for the Republican position… Ro Khanna, that’s nice. That isn’t what we’re going to do,” wagging her fingers in a matronly way.

She went on briefly reverting to talking points about supporting “our heroes” by funding state and local governments, but in an uncharacteristic move, Blitzer refused to back off, “…there are million of Americans out there who can’t pay the rent, feed their kids and $1.8 trillion [is a lot]” adding that he’s also spoken with former Democratic presidential candidate Andrew Yang, who said to take the deal, “it’s not everything you want, but there’s a lot there.”

Talk about supporting evidence for SLL’s recent contention in “Corrupt and Deranged,” that modern military and armaments spending is basically a welfare program! From Michael Krieger at libertyblitzkrieg.com:

Ladies and gentlemen, it appears the long anticipated moment of peak mainstream media stupidity may have finally arrived.

This is what passes for journalism in America today.

Sen. Rand Paul’s expression of opposition to a $1.1 billion U.S. arms sale to Saudi Arabia — which has been brutally bombing civilian targets in Yemen using U.S.-made weapons for more than a year now — alarmed CNN’s Wolf Blitzer on Thursday afternoon.

Blitzer’s concern: That stopping the sale could result in fewer jobs for arms manufacturers.

“So for you this is a moral issue,” he told Paul during the Kentucky Republican’s appearance on CNN. “Because you know, there’s a lot of jobs at stake. Certainly if a lot of these defense contractors stop selling war planes, other sophisticated equipment to Saudi Arabia, there’s gonna be a significant loss of jobs, of revenue here in the United States. That’s secondary from your standpoint?”

Paul stayed on message. “Well not only is it a moral question, its a Constitutional question,” Paul said. “Our founding fathers very directly and specifically did not give the president the power to go to war. They gave it to Congress. So Congress needs to step up and this is what I’m doing.”

Saudi Arabia began bombing Yemen in March 2015, and has since been responsible for the majority of the 10,000 deaths in the war so far. The U.S.-backed bombing coalition has been accused of intentionally targeting civilians, hospitals, factories, markets, schools, and homes. The situation is so bad that the Red Cross has started donating morgue units to Yemeni hospitals.

The Obama administration has sold more weapons to the Saudis than any other administration, pledging more than $115 billion worth of small arms, tanks, helicopters, missiles, and aircraft.

But hey, the Saudis aren’t really that bad, right. No, they’re just one of the most barbaric, inhumane terrorist supporting states on planet earth. Need some proof?

[For a list of links to earlier Liberty Blitzkrieg articles on Saudi Arabia, click the link below and go to the bottom of the article.]