Tesla and cryptocurrencies are plunging, which means the universe of hope-and-a-prayer investments is shrinking. What are the get-rich-quickers to do? From Eric Peters at theburningplatform.com:

Actually, it’s been happening for a long time – like a slowly metastasizing cancer. The afflicted can no longer hide the underlying disease.

Elon is panicking – and executives are bailing. Yesterday, the company’s chief accounting officer, Dave Morton, resigned less than a month after taking the job. What do you imagine he  . . . took account of? 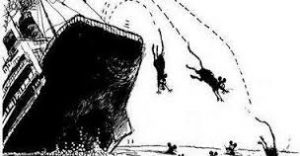 “Since I joined Tesla on August 6th, the level of public attention placed on the company, as well as the pace within the company, have exceeded my expectations,” Morton said a statement released by the company in a filing with the Securities and Exchange Commission. “As a result, this caused me to reconsider my future.”

This is the sort of pabulum boilerplate issued by fleeing White House staffers, who sense a sinking ship and would rather not get wet.

“I want to be clear that I believe strongly in Tesla, its mission, and its future prospects, and I have no disagreements with Tesla’s leadership or its financial reporting,” he added.

Of course. I have nothing but respect for the president and his leadership… .

Also abandoning ship is Tesla’s chief “people officer” –  whatever that is. Gaby Toledano – who served as whatever that is – also announced she will not be coming back to work on the same day that Morton pinched his nose with his left hand and jumped over the railings into the water below.

Musk released another boilerplate nothing-to-see-here statement: Toledano is merely leaving in order to ” . . .spend more time with her family and has decided to continue doing so for personal reasons.”

But the Street is not taking these departures lightly.

Tesla’s stock prices took a a 6.3 percent dive on Friday; the night prior (Thursday) Elon was seen on a Podcast smoking a joint and drinking whiskey and looking extremely Doomed, like a saggy male version of Anne Bolyen the day before her date with the French swordsman King Henry had imported as a final gesture of kindness toward his soon to be headless ex. 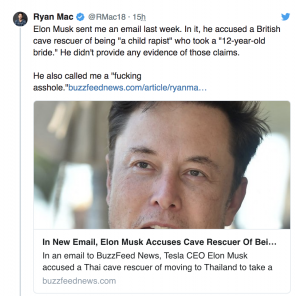 But the death dive is steeper than just 6.3 percent. Since August – when Elon began to show public signs of coming unglued – the value of the electric car company’s stock has lost a third of its former value.

This followed Musk’s surprise (to investors) announcement that he was going to take the company private – so as to keep its coming-unglued operations private. For the first time since the electric car con’s founding some 15 years ago, mainstream media media analysts were finally beginning to raise their hands and ask serious questions. This unnerved Elon, who responded dismissively and petulantly.

But, as the saying goes, reality bites.

Tesla has never earned money but has taken a great deal of it. About $5.4 billion so far. At its peak, the value of Tesla stock was higher than the value of GM or Ford stock but then, Enron and WorldCom (for those who remember) were once highly valued, too. The fact that something has a price tag does not always mean it has value. And if it does not have value, the price inevitably falls. 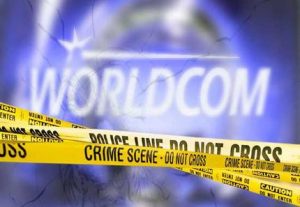 GM and Ford – whatever their many flaws as companies – sell an inherently viable product. Not necessarily any specific model of GM or Ford car, but the internal combustion-powered car. These would exist even if GM and Ford went out of business. They do not require mandates and subsidies to exist.

Tesla is flawed as a company – and sells a product that is not viable. If this were not true, Tesla (and electric cars, generally) could exist without reliance on such things as carbon credits and zero emissions vehicle production quotas, which attempt to replace market demand for electric cars – virtually nil – with government mandates.

The problem there is people can’t (yet) be forced to buy electric cars and even those who are interested lose interest when faced with having to actually buy them at market prices. As an example of this, when Denmark eliminated the personal subsidy given to electric car buyers, Tesla sales crashed  by 94 percent. That’s not a typo. With the subsidy in place, 2,738 Teslas were sold in 2015. With the subsidies gone, 176 Teslas were sold the following year. 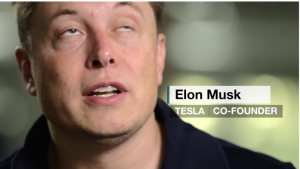 Elon has admitted openly that he can’t do “business” without these subsidies: “Clean energy vehicles” – as he styles them – “aren’t attractive enough to compete without some form of taxpayer-backed subsidy.”

It is what has kept Elon afloat (sort of) thus far.

But the subsidy no longer applies once a company makes more than a relative handful of electric Turduckens. Then the purchaser must pay his own way – and so must Elon. The problem is that Teslian profitability – that never-to-be-reached oasis in the desert – depends entirely on mass-production and mass sales (real ones, not give-aways) of electric Turduckens, specifically, the much-touted Model 3.

Elon is now caught between a very big rock and a very hard place.

He cannot make a profit on his mass-produced Model 3 without the billions in subsidies necessary to tamp down the transaction price enough to make these things appealing to a mass audience.

But if he sells more than a few of the things, the subsidy gets pulled and the cars instantly become cost prohibitive for most people to consider buying.

The Tesla 3 – at a market price – is grossly overpriced. It’s a $40,000-plus compact sedan that offers little – besides being electric – that you couldn’t buy for about $20,000 in a non-electric compact sedan.

Unlike the six-figure Model S – which is at least luxurious and ultra-fancy – the Model 3 is pretty spartan in terms of its features and amenities. It has AC and most power options, a nice stereo and a big LCD screen. Some “apps.” 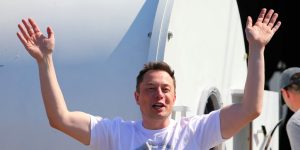 Elon wants people to compare the Tesla 3 with entry-level luxury compact sedans like the Audi A3 and Lexus ES350. But those cars still cost thousands less and are much nicer cars.

They have luxuries and amenities the Tesla 3 doesn’t.

Plus, room. A car like the ES350 (which shares its chassis with the Toyota Avalon) is a mid-sized-verging-on-full-sized car, with a wonderfully roomy back seat and a big trunk. The Tesla 3 has neither.

Most people who have $40k to spend on a car want –  expect – more in the way of features and amenities (and room) than they’d get for $20,000. Electricity only takes you so far – literally as well as figuratively.

But Elon doesn’t care what the market wants or expects. 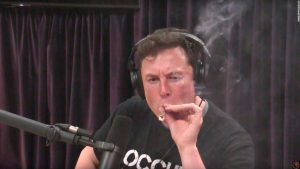 Tesla is in trouble – on death’s door – for exactly this reason. Elon’s effrontery and arrogance.

Which is the effrontery and arrogance of the whole electric car putsch.

A putsch is an attempt by a small – necessarily violent – minority to impose itself on the majority.

If there were market demand for what Elon’s selling, Elon would not have trouble selling it.

As simple as that is, it’s a complexity unfathomable by Elon, the know-it-all.

But it’s a reality check everyone else is beginning to appreciate – including people who used to work for Elon.