It never takes newly-elected Italian politicians long to understand why they must remain in the euro system, and that the ECB will guarantee to keep interest rates significantly lower than they would otherwise be. Yet the ECB is now giving up its asset purchases, so won’t be buying Italian debt or any other for that matter. The rigging of the Eurozone’s sovereign debt market is at a turning point. The ending of this source of finance for the PIGS2 is a very serious matter indeed.

A side effect of the ECB’s asset purchase program has been the reduction of Eurozone bank lending to the private sector, which has been crowded out by the focus on government debt. This is illustrated in the following chart. 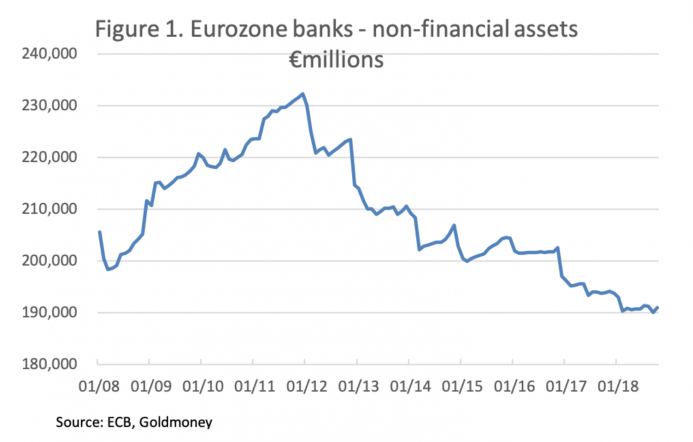 Following the Lehman crisis, the banks were forced to increase their lending to private sector companies, whose cash flow had taken a bad hit. Early in 2012 this began to reverse, and today total non-financial bank assets are even lower than they were in the aftermath of the Lehman crisis. Regulatory pressure is a large part of the reason for this trend, because under the EU’s version of the Basel Committee rules, government debt in euros does not require a risk weighting, while commercial debt does. So our first danger sign is the Eurozone banking system has ensured that banks load up on government debt at the expense of non-financial commercial borrowers.

The fact that banks are not serving the private sector helps explain why the Eurozone’s nominal GDP has stagnated, declining by 12% in the six largest Eurozone economies over the ten years to 2017. Meanwhile, the Eurozone’s M3 money increased by 39.2%. With both the ECB’s asset purchasing programs and the application of new commercial bank credit bypassing the real economy, it is hardly surprising that interest rates are now out of line with those of the US, whose economy has returned to full employment under strong fiscal stimulus. The result has been banks can borrow in the euro LIBOR market at negative rates, sell euros for dollars and invest in US Government Treasury Bills for a round trip gain of between 25%–30% when geared up on a bank’s base capital.

The ECB’s monetary policy has been to ignore this interest rate arbitrage in order to support an extreme overvaluation in the whole gamut of euro-denominated bonds. It cannot go on for ever. Fortunately for Mario Draghi, the pressure to change tack has lessened slightly as signs of a US economic slowdown appear to be increasing, and with it, further dollar interest rate rises deferred.

Our second danger sign is the massive TARGET2 interbank imbalances, which have not mattered so long as everyone has faith that it does not matter. This faith is the glue that holds a disparate group of national central banks together. Again, it comes down to the maintenance of asset values, because even though assets are not formally designated as collateral, their values underwrite confidence in the TARGET2 system.

Massive imbalances have accumulated between the intra-regional central banks, as shown in our next chart, starting from the time of the Lehman crisis.

Germany’s Bundesbank, at just under €900 billion is due the most, and Italy, at just under €490 billion owes the most. These imbalances reflect accumulating trade imbalances between member states and non-trade movements of capital, reflecting capital flight. Additionally, imbalances arise when the ECB instructs a regional central bank to purchase bonds issued by its government and local corporate entities. This accounts for a TARGET2 deficit of €251 billion at the ECB, and surpluses to balance this deficit are spread round the regional central banks. This offsets other deficits, so the Bank of Italy owes more to the other regional banks than the €490 billion headline suggests.

Trust in the system is crucial for the regional central banks owed money, principally Germany, Luxembourg, Netherlands, and Finland. If there is a general deterioration in Eurozone collateral values, then TARGET2 imbalances will begin to matter to these creditors.

Commercial banks in the Eurozone face a number of problems. The best way of illustrating them is by way of a brief list:

This list is not exhaustive, but it can be readily seen that an environment of declining asset prices and higher euro bond yields increases systemic threats to the entire banking system. As was the case with Austria’s Credit-Anstalt failure in 1931, one falling domino in the EU can easily topple the rest.

The ECB Itself is a Risk

As stated above, the ECB through its various asset purchase programs has caused the accumulation of some €2.5 trillion of debt, mostly in government bonds. The euro system’s central banks now have a balance sheet total of €4.64 trillion, for which the ECB is the ringmaster. Most of this debt is parked on the NCBs’ balance sheets, reflected in the TARGET2 imbalances.

The ECB’s subscribed equity capital is €7.74 billion and its own balance sheet total is €414 billion.3 This gives an operational gearing on core capital of 53 times. Securities held for monetary purposes (the portion of government debt purchased under various asset purchase programs shown on the balance sheet) is shown at €231 billion (it will have increased further in the current year). This means a fall in the value of these securities of only 3% will wipe out all the ECB’s capital.

If the ECB is to avoid an embarrassing recapitalization when, as now seems certain, bond yields rise, it must continue to rig euro bond markets. Therefore, the reintroduction of its asset purchase programs to stop bond yields rising becomes the last fling of the dice. The debt trap Eurozone governments find themselves in has also become a trap for the ECB.

3 responses to “The Eurozone Is in a Danger Zone, by Alasdair Macleod”