The shit is hitting the fan all at once. From James Howard Kunstler at kunstler.com:

And so, America has a new manufactured crisis, ElectionGate, as if all the other troubles piling up like tropical depressions marching across the September seas were not enough. Let me remind you what else is going on. The Wuhan pandemic is still on the scene, the economy is collapsing, a domestic race-war is escalating, the whole west coast is burning, and US oil production is crashing. Oh… and slow-moving tropical storm Sally is forecast to come ashore as a hurricane on the Gulf Coast today, dumping up to two feet of rain.

America needs a constitutional crisis like a hole in the head, and that’s exactly what’s being engineered for the holiday season by the clever folks in the Democratic Party’s Lawfare auxiliary. Here’s how it works: the complicit newspapers and cable news channels publish polls showing Joe Biden leading in several swing states, even if it’s not true. Facebook and Twitter amplify expectations of a Biden victory. This sets the stage for a furor when it turns out that he loses on election night. On cue, Antifa and BLM commence to riot all around the country. Meanwhile, a mighty harvest of mail-in votes pours into election districts utterly unequipped to validate them.

Lawfare cadres agitate in the contested states’ legislatures to send rogue elector slates to the electoral college. The dispute ends up in congress, which awaits a seating of newly-elected representatives on January 4, hopefully for Lawfare, mostly Democrats. Whoops…! Turns out the Dems lost their majority there too. Fighting in the streets ramps up and overwhelms hamstrung police forces in Democratic-run cities. January 20 — Inauguration Day — rolls around and the Dems ask the military to drag Trump out of the White House “with great dispatch!” as Mr. Biden himself put it so nicely back in the summer. The US military breaks into two factions. Voilà: Civil War Two.

You didn’t read that here first, of course. It’s been all over the web for weeks, since the Democratic Party-sponsored Transition Integrity Project (cough cough) ran their summer “war game,” intending to demonstrate that any Trump election victory would be evidence of treason and require correction by any means necessary, including sedition, which they’d already tried a few times in an organized way since 2016 (and botched). The Democrats are crazy enough now to want this. They have driven themselves crazy for years with the death-wish of eradicating western civ (and themselves with it). There are many exegeses of this phenomenon, mostly derived from Marxist theories of revolution, but my own explanation departs from that.

The orgy of political hysteria, insane thinking, and violence is a psychotic reaction to the collapsing techno-industrial economy — a feature of it, actually. When all familiar social and economic arrangements are threatened, people go nuts. Interestingly, the craziness actually started in the colleges and universities where ideas (the products of thinking) are supposed to be the stock-in-trade. The more pressing the practical matters of daily life became, the less intellectuals wanted to face them. So, they desperately generated a force-field of crazy counter-ideas to repel the threat, a curriculum of wishful thinking, childish utopian nostrums, and exercises in boundary-smashing. As all this moved out of the campuses (the graduation function), it infected every other corner of American endeavor, institutions, business, news media, sports, Hollywood, etc. The country is now out of its mind… echoes of France, 1793… a rhyme, not a reprise.

The US economy began a slow and insidious collapse because its petroleum energy base became unaffordable. The reality of that was obscured by paradoxical appearances: the shale oil miracle goosed up US oil production from under five million barrels-a-day in 2007 to thirteen million barrels-a-day in 2019. Pretty awesome. Seemed like we were awash in oil. The problem was the companies producing shale oil couldn’t make money at it, and the loans that went into staging the shale oil “miracle” went bad… and then the companies couldn’t get new loans… and went bankrupt. So, the crash of US oil production is a self-reinforcing feedback loop that is sure to continue and will make things worse. Now, less than a year after reaching that majestic 13 million barrels-a-day, production has fallen to around 10 million a day — quite an impressive drop. Further obscuring the actual dynamic in play, gasoline prices at the pump are quite low — under $2.50-a-gallon where I live, compared with $4-plus a couple of years ago — and most citizens consider the price of gasoline their sole index of how things are going in the oil industry. 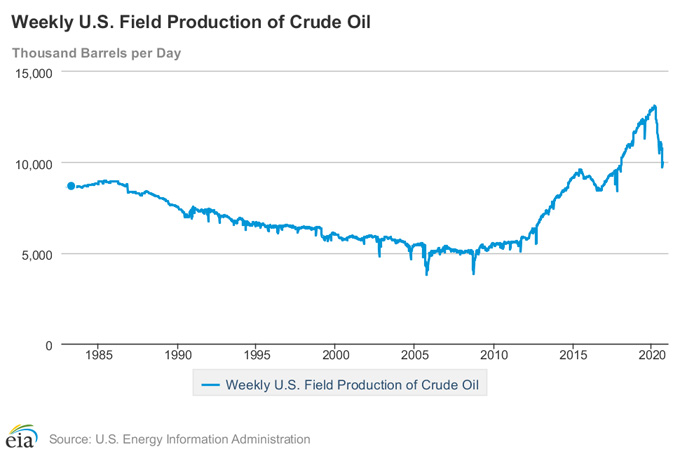 The Covid-19 pandemic has aggravated and accelerated the damage from that by shutting down much of small business across America since March. The businesses and people who owned them have suffered terribly. That and the public lockdowns have greatly depressed the demand for oil products, driving the price-per-barrel down and reducing the cash flow of the oil companies. That also aggravated worsening relations with our principal trading partner, China, the net effect of which threatens the supply chain for all sorts of critical parts and products needed to keep our complex systems running.

Whether Mr. Trump or anybody can respond intelligently to this long emergency is a matter of considerable moment. As far as election politics are concerned, Mr. Trump is only marginally better positioned because he is not in favor of destroying the existing institutions of the republic as his opponents are. There’s less reason to believe he’s capable of coping with the nuts-and-bolts of the economic collapse that awaits after the election dramaturgy plays out. For Mr. Trump, much depends on the illusory performance of the implausible financial markets. This is the season for market crashes, as it is the season for Atlantic cyclones, and those markets have been acting as toppy as a moon-shot lately.

Meanwhile, the BLM mayhem continues overnight, this time in stodgy little old Lancaster, PA, where a knife-wielding Hispanic man was shot by the cops. Crazy how unjustified that seems. The incident and the reaction to it (riot… fires) followed the assassination attempt of two LA County sheriff’s deputies in their car Saturday night by what appears to have been a black child or a dwarf. Afterward, BLM “protesters” showed up at the hospital where the deputies were undergoing surgery, shouting “I hope they die.” I can’t wait to hear Rachel Maddow and Lawrence O’Donnell try to explain that to their faithful fans on MSNBC.