Is Trump Kicking the Saudis to the Curb the Beginning of Something Not Terrible? by Tom Luongo

The Saudi Arabia government is as bad as or worse than the Iranian regimes we’ve been trying to change since 1979. From Tom Luongo at tomluongo.me:

More than anything else in Saudi Arabia, that thing you smell is fear. Everything is coming unglued for the royal family there all at once. If we all weren’t so distracted by the Coronapocalypse these things would all be front page news.

In the past week there have been three major stories concerning Saudi Arabia, none of the bullish.

First, there was the news that UAE-backed forces in Yemen broke with the Saudis-led coalition there to declare the Southern Transitional Council the new administrators over southern Yemen which includes the capital and major port at Aden.

This led to major clashes over the next week between forces which less than two weeks ago were supposedly on the same side.

In addition, Saudi mercenaries were routed in Northern Yemen. The UAE pulled its troops out of Yemen ending its fight with the Houthis after the attack on the Ab Qaiq oil processing facility last summer.

Finally, the Saudis accepted a UN-brokered ceasefire with the Houthis. This is a two-week provisional ceasefire, but considering how badly their mercs and pet head-chopping animals have been faring this should be considered a mercy gesture by the Houthis.

END_OF_DOCUMENT_TOKEN_TO_BE_REPLACED

There was some weird things going on in the oil market today. They were paying you to take it off their hands. From Wolf Richter at wolfstreet.com:

Some hedge funds and big crude-oil traders must be blowing up.

It’s not often that we’re served up a WTF moment like this. Just about a couple of hours ago, I published my article about US crude-oil benchmark grade West Texas Intermediate (WTI) and how the May futures contract for it collapsed by 45% to $10 a barrel — US Crude Oil Gets Annihilated Under Targeted Saudi Attack — and I pointed at some of the dynamics. But WTI kept plunging.

This is the near-month May futures contract, which expires tomorrow. It should normally trade close to the spot market price, but has now divorced from it. It has continued to collapse in a breath-taking pace to $8 a barrel, then $4, then $2, then $0, then below zero, then at -$10 and then… and now settled at negative -$37.63 a barrel: 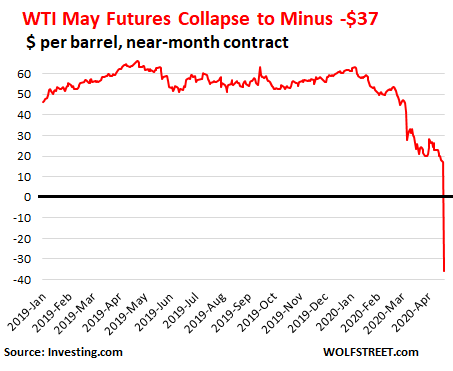 This is obviously completely nuts. Futures contracts that expire the next day should be close to the spot market cash price.

END_OF_DOCUMENT_TOKEN_TO_BE_REPLACED

OPEC++ Or A Dead Shale Industry? by Moon of Alabama

Vladimir Putin has the world oil industry by the balls, particularly the US shale producers, whose costs are far higher than Russia’s. From Moon of Alabama at moonofalabama.org:

Today there is a meeting by video of the OPEC states and Russia. Tomorrow the energy ministers of all G-20 states will likewise meet. Their discussions will be about the sinking global oil price caused by a lack of demand due to the novel coronavirus pandemic and record oil output from Saudi Arabia and Russia. ‘Western’ media have been optimistic that an agreement will be found:

The Organization of the Petroleum Exporting Countries and other producers including Russia, a group known as OPEC+, are expected to discuss record cuts equivalent to 10% to 15% of global supplies, although demand has plunged by up to 30%.

It is unlikely that OPEC will agree on any cut unless the U.S. and other large producers join the deal. The U.S. is, for now, unlikely to do that.

Until the end of the last OPEC+ agreement this month and the onset of the pandemic demand slump, the three top producers were the U.S. with 12.7 million barrels per day, Russia with 10.9 mbpd and Saudi Arabia with 9.8 mbpd.

Since 2016 OPEC and Russia had reduced their production to keep the oil price in the $60/b range. This effectively subsidized the U.S. shale industry. U.S. production kept growing while production by Russia and Saudi Arabia was artificially limited. It allowed the U.S. to grab more global market share at profitable prices. 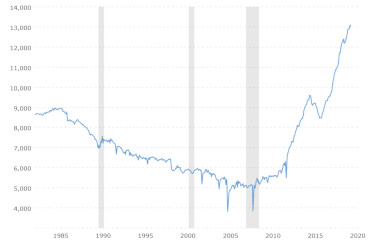 END_OF_DOCUMENT_TOKEN_TO_BE_REPLACED

Putin: Oil Glut Is Really About Saudi Desire To Crush US Shale, by Tyler Durden

Who wants to put US shale oil drillers out of business more, Russia or Saudi Arabia? From Tyler Durden at zerohedge.com:

While it appears an expected emergency virtual OPEC+ meeting planned for Monday has been postponed, pushed back to later in the week to allow more time for negotiations, it’s likely that we’ll actually see the heated blame-game for the collapse in oil prices ratchet up — and oh, in the meantime oil is set to crater come Monday as the feud is only expected to get uglier.

Indeed the aggressive war of words has started, with Putin offering a biting Russian narrative aimed at the Saudis in remarks Friday: “It was the pullout by our partners from Saudi Arabia from the OPEC+ deal, their increase in production and their announcement that they were even ready to give discounts on oil” that drove the crash alongside the double-whammy of the coronavirus-driven drop in demand, Putin said according to Bloomberg.

“This was apparently linked to efforts by our partners from Saudi Arabia to eliminate competitors who produce so-called shale oil,” Putin continued. “To do that, the price needs to be below $40 a barrel. And they succeeded in that. But we don’t need that, we never set such a goal.”

END_OF_DOCUMENT_TOKEN_TO_BE_REPLACED

The Inevitable Outcome Of The Oil Price War, by Simon Watkins

One might reasonably posit that when Crown Prince Mohammed bin Salman (MbS) signalled that Saudi Arabia was once again going to produce oil to the maximum to crash oil prices in a full-scale oil price war, Russian President Vladimir Putin probably fell off the horse he was riding bare-chested somewhere in Siberia because he was laughing so much. There is a phrase in Russian intelligence circles for clueless people that are ruthlessly used without their knowledge in covert operations, which is ‘a useful idiot’, and it is hard to think of anyone more ‘useful’ in this context to the Russians than whoever came up with Saudi’s latest ‘plan’. Whichever way the oil price war pans out, Russia wins.

In purely basic oil economics terms, Russia has a budget breakeven price of US$40 per barrel of Brent this year: Saudi’s is US$84. Russia can produce over 11 million barrels per day (mbpd) of oil without figuratively breaking sweat; Saudi’s average from 1973 to right now is just over 8 mbpd. Russia’s major oil producer, Rosneft, has been begging President Putin to allow it to produce and sell more oil since the OPEC+ arrangement was first agreed in December 2016; Saudi’s major oil producer, Aramco, only suffers value-destruction in such a scenario. This includes for those people who were sufficiently trusting of MbS to buy shares in Aramco’s recent IPO. Russia can cope with oil prices as low as US$25 per barrel from a budget and foreign asset reserves perspective for up to 10 years; Saudi can manage 2 years at most.

END_OF_DOCUMENT_TOKEN_TO_BE_REPLACED

Putin Unleashes Strategic Hell on the U.S., by Tom Luongo

Maybe demonizing Vladimir Putin, groundlessly blaming him for conspiracies to interfere in US politics, moving huge NATO forces to Eastern Europe’s border with Russia, abrogating long-standing arms control treaties, and trying to throw monkey wrenches into the Nord Stream 2 pipeline weren’t such good ideas after all. From Tom Luongo at tomluongo.me:

I am an avid board game player. I’m not much for the classics like chess or go, preferring the more modern ones. But, regardless, as a person who appreciates the delicate balance between strategy and tactics, I have to say I am impressed with Russian President Vladimir Putin’s sense of timing.

Because if there was ever a moment where Putin and Russia could inflict maximum pain on the United States via its Achilles’ heel, the financial markets and its unquenchable thirst for debt, it was this month just as the coronavirus was reaching its shores.

Like I said, I’m a huge game player and I especially love games where there is a delicate balance between player power that has to be maintained while it’s not one’s turn. Attacks have to be thwarted just enough to stop the person from advancing but not so much that they can’t help you defend on the next player’s turn.

All of that in the service of keeping the game alive until you find the perfect moment to punch through and achieve victory. Having watched Putin play this game for the past eight years, I firmly believe there is no one in a position of power today who has a firmer grasp of this than him.