The Worm in the Machine, by James Howard Kunstler

Computers can be programmed to cheat. From James Howard Kunstler at kunstler.com:

The avatars of good government, Joe Biden, and his righteous Democrats, seem a little bit spooked by the globe-of-silence enveloping Mr. Trump and his lawyers the past few days. The Dems’ narrative at this point, mid-game, is that… “the election was the most secure in the nation’s history” (The New York Times).  Anything else is a “conspiracy theory.” Here’s what the Democrats don’t tell you: theories are subject to proof, and proof brings theories into compliance with reality, including, sometimes, the part about conspiracy. Such as a conspiracy to queer the recent election with vote tabulation software and other wizardries.

I guess we’ll find out what can be proven, and that is all the president is attempting to do, like anybody with faith in the scientific method. In Oakland County, Michigan, for instance, comprising the northwest suburbs and exurbs of Detroit, the graph shows a mysterious bending of votes off a trend-line at a pretty clear break-point. Each blue square is a voter precinct. 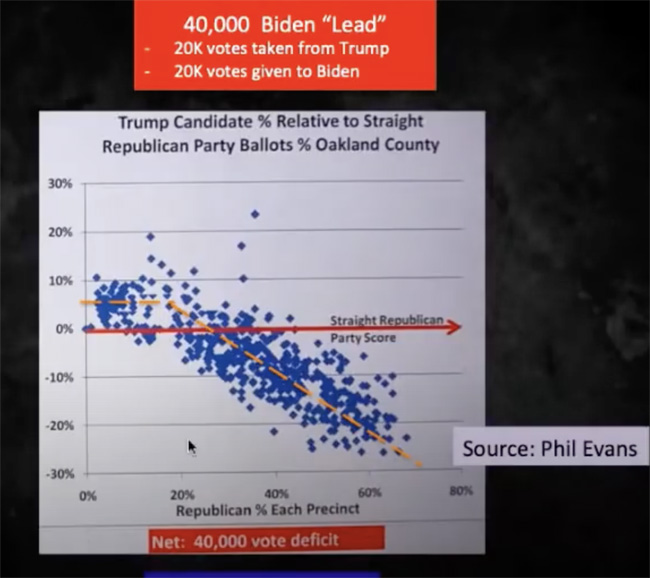 The very same plotline is repeated in several other Michigan counties heavily trending for the president in early voting and then swooning mysteriously for Mr. Biden after a four-hour break in action. How to account for this strange occurrence? The worm in the machine, perhaps: a simple algorithm (i.e., set of coded instructions) embedded in the Dominion vote tabulation software — product of a company, to remind you, partially owned by Senator Feinstein’s husband, Richard C. Blum, and represented by lobbyist Nadeam Elshami, Nancy Pelosi’s former chief of staff. It was Mr. Elshami’s mission to visit state legislators around the country and persuade them to adopt (that is, purchase) the Dominion system. The algorithm appears to subtract votes from one candidate and add them to the other candidate. It’s a feature, not a bug. Weird, a little bit.

So, that’s one thing that remains to be proven. How did the algorithm work? Can it be isolated and described? Did its task leave digital footprints? Not all the software geniuses in the USA work for Silicon Valley. Some may be assisting Mr. Trump’s attorneys in figuring this out and constructing cases for the various courts. Since it takes more than a day-and-a-half to bring lawsuits, that may account for the Democrats’ rush to peremptorily discard such formal inquiries and just declare Mr. Biden the winner. Similar ballot tabulation doings show up in the Georgia vote, where a recount is underway, this time with observers and without four-hour mystery pauses. And then there is Pennsylvania.

If DC is the Swamp, then Pennsylvania is a Nile Valley of ballot harvesting, overflowing its banks every November to fertilize especially the loamy precincts of Philadelphia, where votes spring up like ground ivy. As it happened this season, on top of that rich reaping of cultivated votes was an additional layer of state government monkeyshines now headed for adjudication in the US Supreme Court. Will they dare to take the case? It’s not a sure thing, but they’d better have a good reason not to because a whole lot of vested credibility in our national system of government is at stake.

In the meantime, I’m standing by to see how things pan out. If those three states’ electoral votes — Michigan, Pennsylvania, and Georgia — are shifted to Mr. Trump’s column by re-tabulation, with late-reporting North Carolina added, then the President will end up with 284 electoral votes, making him the winner (and leaving Mr. B the loser with 238).  Other combinations of adding or subtracting the electoral votes of these states-at-issue would leave no clear winner and thus propel the matter into the House of Representatives, where the peculiar constitutional math (one vote for each state delegation) does not favor Mr. Biden. Doesn’t look like the extreme long-shot that the captive news media is touting it to be.

Of course, in the event that none of this goes Mr. Trump’s way, then, of course, Mr. Biden moves into the White House with his two German shepherds plus the entire RussiaGate cast-of-characters, a delegation of Silicon Valley nobs, and half of K Street to assist him in governing the USA. That outcome will set up all the right people to preside over the greatest economic collapse in the history of the world. Okay, have it your way. Just sayin’.