Yellen Gets Ethics Waiver To Lead Regulator Meeting On Gamestop Insanity After Taking $810K From Citadel, by Tyler Durden

And they wonder why people don’t trust the government. From Tyler Durden at zerohedge.com:

Once it became clear – just a few seconds after AOC first rage-tweeted about RobinHood refusing to let “the people” trade more shares of $GME and $AMC before adding that she’d support a public hearing on what had just happened – that all the key players in the “WallStreetBets”/”Gamestop” trading saga would soon be dragged in front of Congress like a gaggle of tech CEOs, the newly elected Democrats and their hand-picked economic team were faced with a critical question: who exactly was going to preside over these proceedings on the regulatory side, since they are virtually all compromised by key connections to the financial services industry, and not just the big banks.

Over the past decade, a new category of financial beast has arisen. At Zero Hedge, we have been writing about them for years. They’re alternatively called “high frequency traders” “high freaks”, and “orderflow frontrunners” for those enjoy speaking the truth, or “market makers” for the political correct, but after the events of last week, millions of people were either asking Google, or their one IBD analyst friend, to explain what ‘Citadel’ is, and how it works…. the same Citadel which threatened to sue Zero Hedge last June for accusing it of frontrunning orders, just weeks before regulators punished Citadel for frontrunning orders (oops).

Now, barely days after being confirmed as President Joe Biden’s new Treasury Secretary, Janet Yellen must preside over a major media circus and the most glaring indication yet of just how broken the US stock market is (thanks in large part to her actions while she was head of the Fed). 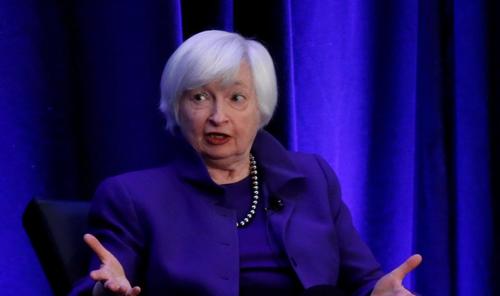 Which is a problem because as a reminder, Yellen received almost a million dollars in “speaking fees” in the past two years from the firm that is the quasi-monopoly “market maker” in the US, responsible for half of retail orderflow thanks to its domination of Robinhood trades…