The South African president and other, more ostensibly objective sources are saying that violence greatly diminished in South Africa after the military was called in. From Tyler Durden at zerohedge.com:

South African President Cyril Ramaphosa said Friday the riotous looting that transformed parts of the country into a warzone was planned, and his “government would not allow anarchy, mayhem” to continue as 25,000 troops have begun to deploy.

“It is quite clear that all these incidents of unrest and looting were instigated, there were people who planned it and coordinated it,” Ramaphosa said.

“We are going after them, we have identified a good number of them and, we will not allow anarchy and mayhem to just unfold in our country,” he told reporters while touring the KwaZulu-Natal province, more specifically, the port city Durban, one of the worst-hit areas by unrest.

In video; President of South Africa @CyrilRamaphosa is on ground.
pic.twitter.com/gkwKVQJwaK

So far, the president’s plan is working. Calm is returning to Gauteng and KwaZulu-Natal provinces.

According to the “Unrest Map” via PolicyLab, unrest across Johannesburg and Durban has dramatically subsided in the last day, either because the military is being deployed or the rioters have run out of stores and warehouses to loot as thousands of businesses were destroyed in the weeklong mayhem. 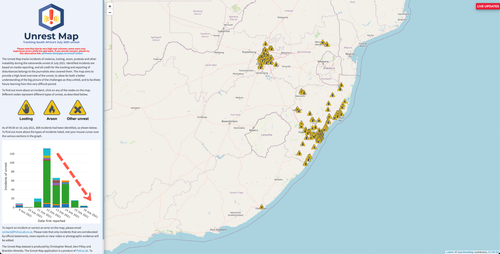