It’s Not the Jab – It’s the Precedent, by Eric Peters 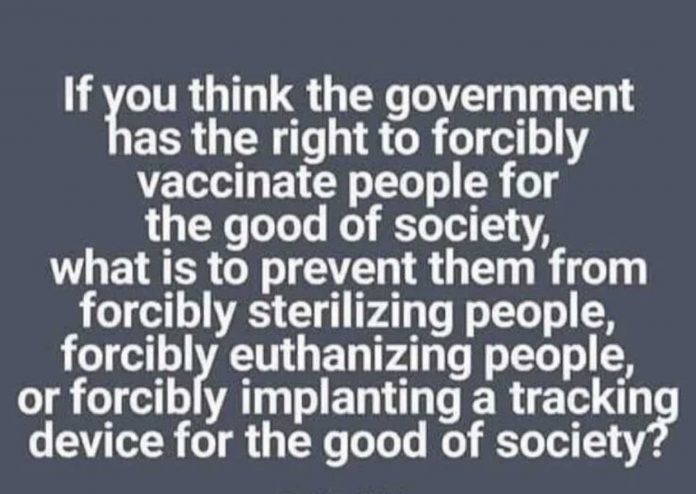 If you knew someone who chose not to exercise, who ate too much not-good food, would you exult in the news of his having been diagnosed with diabetes or cancer? Most people would not and if any did exult, it would be considered evidence of a mental defect (sadism) by the rest.

Yet people – some people – practically celebrate when a person who questions the rightness of forcing people to submit to “vaccinations” gets sick – and practically dance on their graves if they die.

There are many good – sound – reasons for objecting to forcing anyone to get “vaccinated” that have nothing to do with sickness, as such, but rather with this business of forcing people to take medicine or submit to medical treatment of any kind whatsoever. It sets a precedent by affirming the principle that it is ok to force people to take medicine and submit to medical treatment. Once that is established, for any medicine or treatment it will naturally become the basis for requiring that people submit to other medical treatments; they will be required to take other medicines – as decreed by the government and enforced by corporations, through “policies” that render it impossible to work or even to socialize without proof you’ve submitted to these decrees.

There are some, perhaps, who wish to live in such a world but most probably do not. Yet they cannot see that they are helping to build such a world by supporting this push to make everyone roll up their sleeves.

Just this once? If you think so, think again. Please.

As always, there are people who cannot see the inevitability. The same people who could not see that mass acceptance of the “masks” – as these psychological training devices are styled – would lead to mass “vaccinations” – as these unsafe and ineffective temporary symptom suppressors are styled. The same people, in mentality, who could not see that giving the federal government the legal power to seize – that is, to “tax” – a portion of the incomes of the very wealthy would inevitably lead to the government seizing a portion of the incomes of everyone.

One response to “It’s Not the Jab – It’s the Precedent, by Eric Peters”