As a doctor, here’s my opinion on Nicki Minaj, swollen testicles and vaccine hesitancy – she’s not talking boll**ks, by R. M. Huffman

It really bothers the Covid commissars when Hollywood celebrities and sports stars contradict the party line of vaccines, because they have sometimes massive platforms. From R. M. Huffman at rt.com: 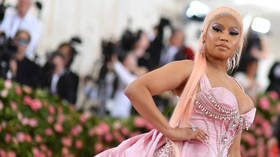 US rapper Nicki Minaj arrives for the 2019 Met Gala at the Metropolitan Museum of Art on May 6, 2019, in New York. © ANGELA WEISS / AF
Rap star Nicki Minaj made the headlines for telling her millions of fans to make informed, personal decisions over whether to have the Covid jab or not. Why all the fury, when patient autonomy is a founding principle of medicine?

Minaj didn’t attend this year’s Met Gala because of the red-carpet event’s Covid-19 vaccine requirement but, even though she missed the big ball, she still made international news… when she tweeted about her cousin’s friend’s swollen testicles.

“My cousin in Trinidad,” she explained, “won’t get the vaccine cuz his friend got it & became impotent. His testicles became swollen. His friend was weeks away from getting married, now the girl called off the wedding. So just pray on it & make sure you’re comfortable with ur decision, not bullied.”

A wave of heated criticism immediately followed, quickly growing into a testy exchange between the Super Bass artist and British provocateur Piers Morgan, who accused Minaj of “peddling lies” after England’s top medical adviser Chris Whitty insisted the rap star ought to be “ashamed” and that her sordid secondhand tale was a “myth” and “clearly ridiculous.” Anthony Fauci, Whitty’s American counterpart, echoed from across the pond, saying, “There’s no evidence that it happens, nor is there any mechanistic reason to imagine that it would happen.” The health minister of Nicki’s native Trinidad weighed in as well, insisting that she had made a “false claim.”

(Interestingly, an uncommon but dramatic presentation of scrotal swelling can also be caused by a parasitic infection of the lymph system, resulting in a disease called filarial elephantiasis. One of its treatments? The “horse dewormer” of recent infamy, ivermectin.)

Before you, like thousands of would-be diagnosticians trained at Google University, dismiss her story as inflammatory boll**ks, let’s take a moment to examine her claim, and the advice that follows, objectively.