The Power of Labor: Record Churn & Quits among Workers as Employers Desperate to Fill Huge Number of Job Openings, by Wolf Richter

Workers should be in the driver’s seat as far as negotiating wages and benefits go. From Wolf Richter at wolfstreet.com:

Millions of people are still watching this spectacle from the sidelines.

Widespread labor shortages have caused companies to offer higher wages, sign-on bonuses, improved benefits, schedules, and hours. This has the effect that people who already have jobs switch jobs to better their situation. The company that lost the employee now has a job opening and needs to compete in the job market with higher pay, etc.  It’s this type of arbitrage by workers in a hot job market that causes wage increases to spread – and employers have raised wages by the most in 20 years – amid record churn.

The number of people who quit jobs voluntarily to work for another company, or to stay home and take care of the kids, or to spend more time with their cryptos, or whatever, spiked by another 164,000 people to a record of 4.43 million in September.

Nearly all of these “quits” (95%) occurred with private sector employers, where quits spiked to 4.22 million, up by 29% from September 2019, which had also been a hot job market. The year 2019 had already seen the highest quits rate in the data going back to 2000. But since March, the power balance between labor and employer, driven by labor shortages, has changed dramatically. 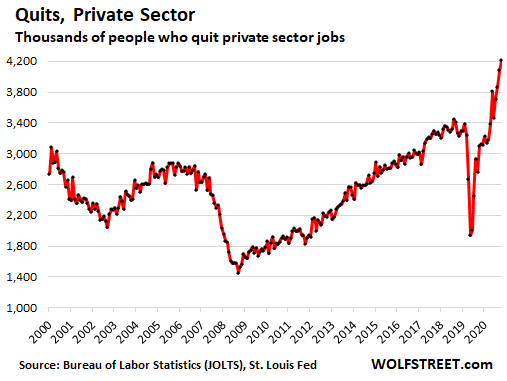