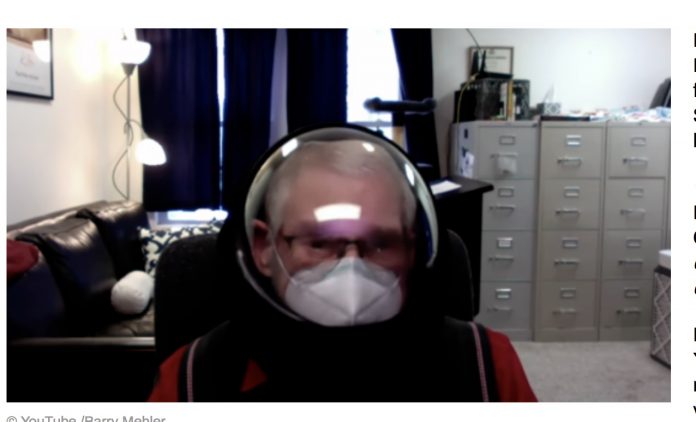 The real sickness making the rounds isn’t physical. Most people recover from colds. Those afflicted with severe mental illness, on the other hand, often need years of therapy.

A particularly sick example of what’s been going around etiolates in the person of Barry Mehler, who is the founder and director the Institute for the Study of Academic Racism (of course he is) at Ferris State University, in Michigan.

He made the news the other day by posting a video of himself wearing a Chin Speedo while also wearing a helmet, like an astronaut – double-plus-good protection against the cold he lives in dread of getting. All that was missing was the oxygen backpack.

What wasn’t missing was the effusion of profanity-speckled insane rage toward the “vectors of disease” – he refers here to his students – whom he “doesn’t want to be anywhere near” and so “keep your fucking distance.”

It’s hear-warming to read of such affection so articulately expressed by a teacher for his for students, whose parents probably spent exorbitant sums to have their children taught about “academic racism”  . . .  by a man like Mehler.