The U.S. has been moving towards totalitarianism since 1913. The George W. Bush administration was a prime mover. From Tyler Durden at zerohedge.com:

Previously classified files obtained by the Brennan Center for Justice reveal that the 2004 George W. Bush administration conducted a holistic review of the president’s emergency powers, with the goal of modernizing a set of secret plans for continuity-of-government in a nuclear war. 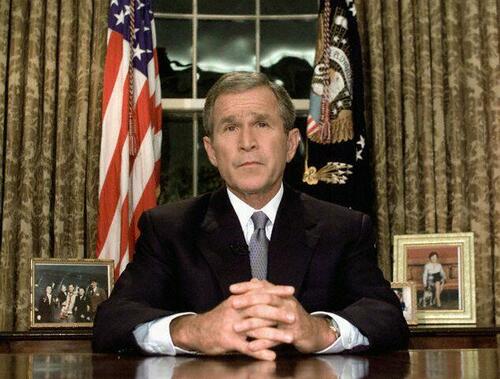 The George W. Bush Presidential Library turned over 500 out of 6,000 pages of the documents, known as “presidential emergency action documents” (PEADs), which “shed troub­ling new light on the powers that modern pres­id­ents claim they possess in moments of crisis,” according to the Brennan Center, which obtained the records through a Freedom of Information Act (FOIA) request.

PEADs were created during the cold war, when the chance of a Soviet nuclear strike was at its peak. Early drafts reportedly rested on broad interpretations of executive powers. According to official reports from the 1960s, various PEADs authorized the president to enact measures such as suspending habeas corpus, to detain “dangerous persons” within the country, to censor news media, and to prevent international travel.

In light if 9/11, one Bush administration official viewed updating the PEADs an “urgent and compel­ling secur­ity effort, espe­cially in light of ongo­ing threats.”

While the Brennan Center was unable to obtain more recent PEADs, the documents show “some of the most disturbing aspects of early-Cold War emergency action documents” were maintained at least throughout 2008.