Nobody wants to get sick, but few want to take the steps necessary to remain healthy. From Eric Peters at ericpetersautos.com:

One of the great incongruities of our time is the obsession with sickness, on the one hand – and the lack of interest, on the other hand, in doing what it takes to be healthy.

And thereby avoid most sicknesses.

This phenomenon could be called allopathia – a combination of allopathic (as in mainstream medicine, that focuses on symptoms – and suppression of them – rather than on causes and changing one’s habits to correct them) and pathological; i.e., compulsive/obsessive. 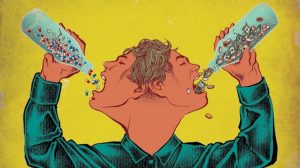 People who suffer from allopathia compulsively and obsessively wear “masks” – because mainstream medicine told them to. They took “vaccines” on the same basis. But they have little interest in losing weight, or changing what they eat. Or what they do, as in terms of exercising rather than “masking.” Because mainstream medicine hasn’t told them to.

Possibly out of ignorance, as modern medical schools devote almost no attention to nutrition and exercise. A fraction of the attention that is devoted to pharmacological symptom suppression, which is no doubt focused on because the pharmaceutical conglomerates fund much of modern allopathic medical education. As in roughly half of all continuing medical education (CME) in this country. How about that? Isn’t that like having the insurance conglomerates  fund the “safety” studies that end up being used to “adjust” the premiums of the insurance coverage people are forced to buy?