ATOMIC BOMBINGS AT 75: John Pilger — Another Hiroshima is Coming — Unless We Stop It Now

Most Americans would rather not look back on the two atomic bombs that were dropped on Japan 75 years ago this month. From John Pilger at consortiumnews.com:

When I first went to Hiroshima in 1967, the shadow on the steps was still there. It was an almost perfect impression of a human being at ease: legs splayed, back bent, one hand by her side as she sat waiting for a bank to open.

At a quarter past eight on the morning of August 6, 1945, she and her silhouette were burned into the granite.

I stared at the shadow for an hour or more, then I walked down to the river where the survivors still lived in shanties.

I met a man called Yukio, whose chest was etched with the pattern of the shirt he was wearing when the atomic bomb was dropped.

He described a huge flash over the city, “a bluish light, something like an electrical short”, after which wind blew like a tornado and black rain fell. “I was thrown on the ground and noticed only the stalks of my flowers were left. Everything was still and quiet, and when I got up, there were people naked, not saying anything. Some of them had no skin or hair. I was certain I was dead.”

Nine years later, I returned to look for him and he was dead from leukemia. 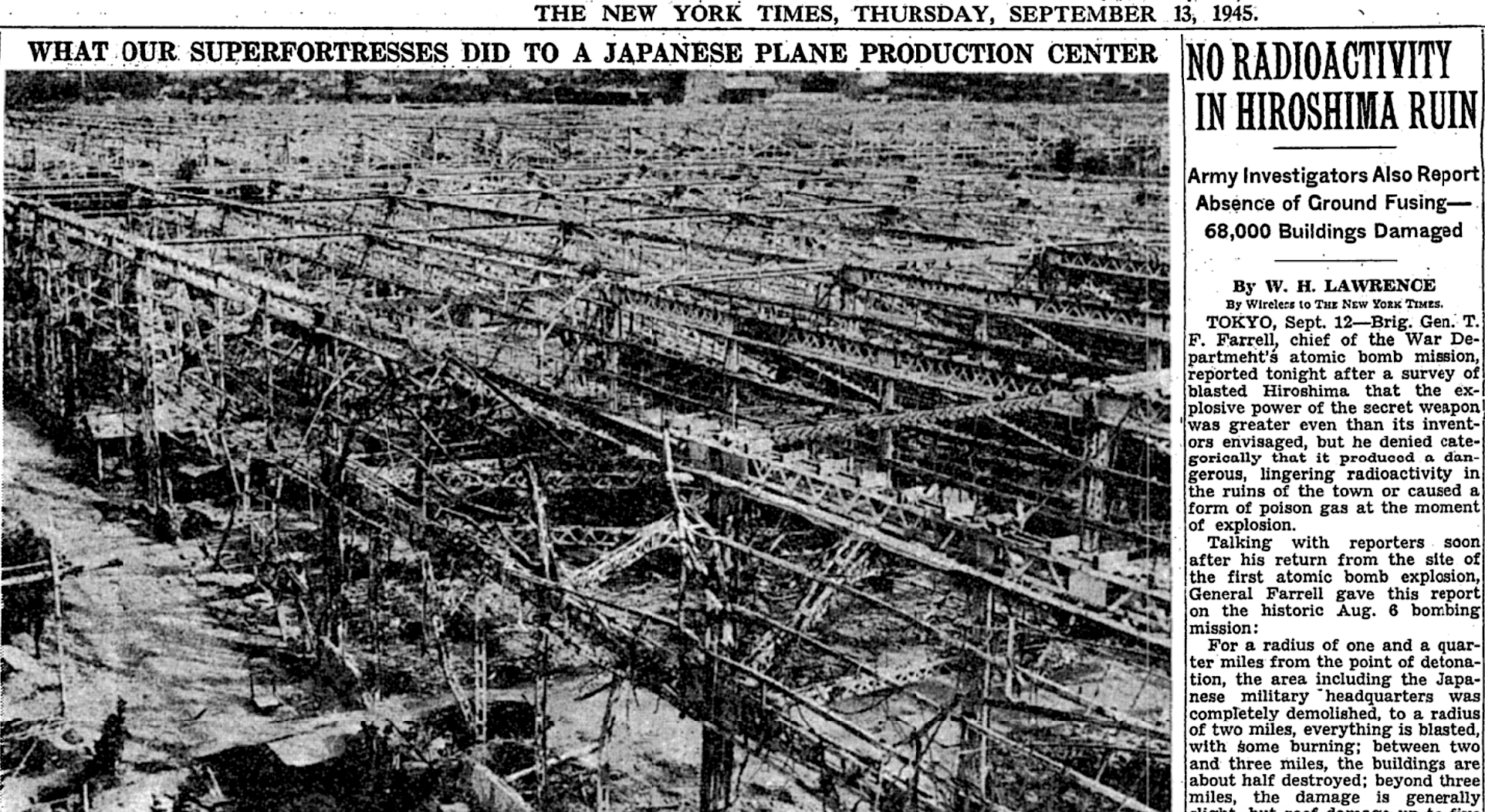 The Truth About Hiroshima and Nagasaki, by Greg Mitchell

I grew up in Los Alamos and have a deep interest in the atomic bomb story. While that story is one of the most important of the twentieth century, it surely is one of the least investigated and analyzed. From Greg Mitchell at antiwar.com:

What Chris Wallace didn’t tell you on the Fox News special adapted from his new bestseller.

Chris Wallace of Fox News has published his first book, Countdown 1945. It’s about the final days of the run-up to dropping the atomic bomb over Hiroshima and Nagasaki. You might have hoped that it would be a bit contrarian – like some of his interviews and commentary on that network.

Would he question what Robert Jay Lifton and I have called “The Hiroshima Narrative” that has held sway in the media and popular culture since President Truman announced the attack on August 6, 1945? That narrative has insisted that the bomb, and only the bomb, could have ended the Pacific war against Japan and thereby saved hundreds of thousands or even a million American lives.

Sadly, based on the evidence of an hour-long Fox News special, which he hosted this past Sunday night, and on his book – now a national bestseller – the answer is no. The only thing remarkable about Wallace’s arguments are that they offer nothing new, as if no challenging evidence or counter-narratives have been raised over the past 75 years.

Why does this matter today? Among the many issues Wallace failed to mention on Fox: America’s official “first-use” policy, initiated in 1945, which enables any president to respond to a non-nuclear attack or threat by launching our nuclear missiles, remains fully in effect today. The enduring defense of the use of the bomb against two cities in 1945 to “save American lives” can only encourage, or at least enable, possible future use – by the U.S. or any other country. In fact, polls show that large numbers of Americans say they would support a nuclear first-strike in response to a grave danger posed by North Korea or Iran.

END_OF_DOCUMENT_TOKEN_TO_BE_REPLACED

Is wiping out some 140,000 civilians in a nation suing for peace moral? From Peter Van Buren at theamericanconservative.com:

It reveals a dangerous strain of vengeance in U.S. foreign policy.

August 6 usually doesn’t make headlines in America. But mark the day by what absence demonstrates: On the 72nd anniversary of the nuclear destruction of Hiroshima and some 140,000 non-combatants, there is no call for reflection in the United States.

In an era when pundits routinely worry about America’s loss of moral standing because of an offish, ill-mannered president, the only nation in history to employ a weapon of mass destruction on an epic scale, against an undefended civilian population, otherwise shrugs off the significance of an act of immorality.

But it is August 6, and so let us talk about Hiroshima.

Beyond the destruction lies the myth of the atomic bombings, the post-war creation of a mass memory of things that did not happen. This myth has become the underpinning of American war policy ever since, and carries forward the horrors of Hiroshima as generations of the August 6 anniversary pass.

END_OF_DOCUMENT_TOKEN_TO_BE_REPLACED

The Day America Became The “Bad Guy”?, by Bill Bonner

America, of course, is always the good guy, as many Americans tell themselves every single day. The rest of us might want to question that assumption. From Bill Bonner at bonnerandpartners.com:

YOUGHAL, IRELAND – There being nothing serious to report from the financial front…

…we go back to our sideline job: irritating our dear readers.

Yes, “Bad Guy” Theory is on the table. We were set to heave it over the side, like a fish too small to meet the legal limit. But after reading our reader mail… followed by a restless night of prayer, meditation, and hard drinking… we decided to look further.

And from what we can see, it is slimy and hideous.

“Bad Guy” Theory (BGT) maintains that there are some people who are good, and others who are bad.

The good ones think they can spot the bad ones… and that they have the right and duty to kill them, because… well… they’re up to no good.

Many readers believe BGT is essentially right; they know damn well who the bad guys are… and think your editor is an SOB for suggesting otherwise.

Writes one, referring to Muslims, Iranians, or Palestinians (we’re not sure which):

If they could, they’d kill you, me, and our families.

We have some personal experience with Iranian people. We lived in Paris for many years and knew, casually, a family of Iranians.

We had dinner with them once or twice, in their apartment in the 16th arrondissement. Never once did they go for our throats with a butcher knife. Nor was the wine poisoned. (The conversation was deathly… but not, as it turned out, fatal.)

Another reader thinks our suggestion – that even good people sometimes do bad things – was out of line:

You owe all of your subscribers an apology.

This reader was particularly annoyed by our implication that dropping an atomic bomb on civilians was perhaps not such a good idea. (We’ll come back to that in a minute.)

To continue reading: The Day America Became The “Bad Guy”?