The Qestion Isn’t Why I’m Vaccine Hesitant, The Question Is Why Aren’t You, by Parker Beauregard   

It’s time to turn the tables. Give people who wear masks weird looks, and with an incredulous expression ask people who advocate vaccines why on earth anyone would do that. It will be a lot of fun. From Parker Beauregard at thebluestateconservative.com:

In the last few weeks, there has been a confluence of evidence against the efficacy of vaccines as well as several thoroughly discredited attempts to mislead the American public on alternative treatments for Covid. It is beyond a doubt that corruption within the highest levels of medical and political circles has made a mockery of both truth and science. Similarly, a mockery has been made of millions of naive Americans simply looking for protection and guidance from supposed experts in their fields.

From the beginning, I was hesitant to take this vaccine because:

Pay no attention to the growing number of medical scientists raising doubts about Covid-19 vaccines. They’re probably paid by the Russians . . . or somebody. From Jennifer Margulis at lewrockwell.com:

In a public comment to the CDC, molecular biologist and toxicologist Dr. Janci Chunn Lindsay, Ph.D., called to immediately halt Covid vaccine production and distribution. Citing fertility, blood-clotting concerns (coagulopathy), and immune escape, Dr. Lindsay explained to the committee the scientific evidence showing that the coronavirus vaccines are not safe.

On April 23, 2021, the CDC’s Advisory Committee on Immunization Practices held a meeting in Atlanta, Georgia. The focus of this ACIP meeting was blood clotting disorders following Covid vaccines. Dr. Janci Chunn Lindsay spoke to the CDC during the time set aside for public comment.

The censorship on social media in particular and the internet in general is relentless. Here is a slightly edited, annotated censorship-proof transcript of Dr. Janci Chunn Lindsay’s 3-minute comment.

You can listen to her testimony on YouTube here (for now, anyway. If this link goes viral, YouTube will likely censor it).

Hi, my name is Dr. Janci Chunn Lindsay. I hold a doctorate in biochemistry and molecular biology from the University of Texas, and have over 30 years of scientific experience, primarily in toxicology and mechanistic biology.

In the mid-1990s, I aided the development of a temporary human contraceptive vaccine which ended up causing unintended autoimmune ovarian destruction and sterility in animal test models. Despite efforts against this and sequence analyses that did not predict this.

Genetic Vaccines: Are They the New Thalidomide? by Lee D. Merritt, M.D.

With vaccines that have only been in existence for about a year, there is of course no way to know what happens to people who take them over the long-term. From Lee D. Merritt, M.D. at newamerican.com:

Many Americans have heard the news account of Dr. Gregory Michael, a 56-year-old Florida physician who, after receiving his first dose of a Pfizer COVID vaccine on December 18 of last year, was hospitalized three days later. He had a total loss of his platelets — the little blood cells that stop bleeding. In spite of being treated by a team of physicians, he died two weeks later from a brain hemorrhage, and was reported to have had zero platelets. By February 10, 2021, 36 other similar cases were reported in the mainstream media. Pfizer, which along with its partner BioNTech made the vaccine the doctor received, said in a statement that it was aware of the death. Typically, they concluded, “We are actively investigating this case, but we don’t believe at this time that there is any direct connection to the vaccine.”

Pfizer made this “finding” despite several unusual circumstances of the case. First, low-platelet disorders, known as idiopathic thrombocytopenic purpura (ITP), most commonly affect children, and generally follow a viral illness. Only 10 percent of ITP cases occur in adults, who usually present with a slow onset form of the disorder, referred to as chronic ITP. The disorder usually starts by someone noticing easy bleeding, such as slow oozing from gums or the nose, or bruises showing up without trauma. Rarely do platelets drop below 20,000, and generally treatment either reverses the disease or prolongs life for years in spite of the problem.

What happened to this physician and the others seems to be a new previously unseen problem related to vaccination — despite the manufacturers’ claims.

Increasingly, vaccine manufacturers and government officials are following the sarcastic maxim from Samuel Shem’s novel of medical residency entitled The House of God that “if you don’t take a temperature you can’t find a fever.” In other words, if we don’t critically look at the actual recorded patient damage, we won’t find our products to be defective. Now, major media are increasingly getting on board, condemning “vaccine hesitancy” and pushing everyone to get vaccinated for COVID, discounting any dangers. But in the practice of medicine, we are supposed to employ the “precautionary principle” — above all do no harm.

Physician: Informed Consent For COVID Vaccine Requires Full Disclosure Of Risk & Liability, And Here It Is… by Dr. Colleen Huber

This is one of the best run downs we’ve seen on all the risks and unknowns that people should know before they make a decision on getting one of the Covid-19 vaccinations. From Dr. Colleen Huber at theburningplatform.com (h/t Steve Z.):

Dr. Huber’s article on TN, Masks Are Neither Effective Nor Safe: A Summary Of The Science, has had millions of views and countless re-posts around the world. Now she weighs in on what “informed consent” for vaccination should include. ⁃ TN Editor 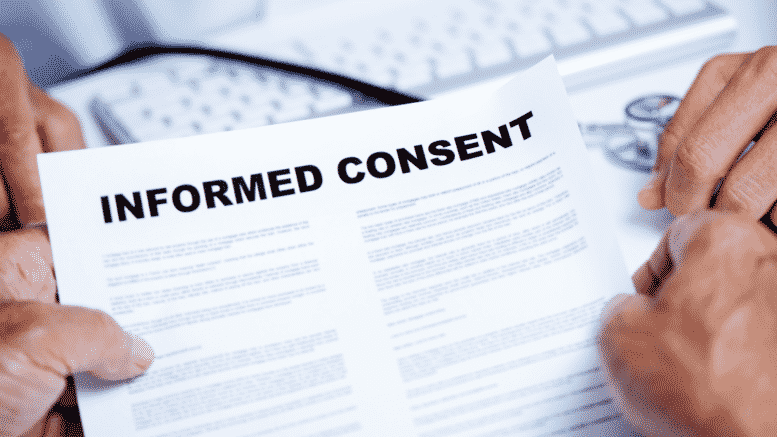 Note: Most of the links below are from medical journals, the FDA, CDC, and other entities that generally support vaccination, yet the information in this article shows how EXTREMELY RISKY the COVID-19 vaccines are.

In my family, we have a rule:  If you consider having an experimental medical procedure done,

I ask that you, the reader, at least take time to consider the above, and at least consider reading information in the links below, before submitting to this experimental medical procedure.

Is the COVID vaccine experimental?  Pfizer and Moderna make the COVID-19 vaccines in the US. The FDA granted “emergency use authorization” for these vaccines (herein “COVID injections,” because they are unlike conventional vaccines).   Emergency use authorization is required by law to be made only if there are no effective treatments for COVID-19.