The green movement is mostly about fake science and corporate opportunism. From Tyler Durden at zerohedge.com:

Executive produced by activist and filmmaker Michael Moore, 21stCentureWire.com points out that the new documentary Planet of the Humans, dares to say what no one else will say on this Earth Day – the leading ‘green’ environmental activists, including Al Gore, have taken their followers down the wrong road – selling out the real environmental movement to some of wealthy corporate interests in America and he world.

This film is the wake-up call to the reality we are afraid to face: the mainstream environmental movement is pushing lies in the form of various techno-fixes and band-aids – all of which are reliant and use large quantities of fossil fuels and rare earth minerals. Have environmentalists fallen for a “green” illusion? More than any other documentary to date, this film exposes the wholesale fraud behind subsidized industries like biomass fuels, wind turbines, and even not-so ‘green’ electric car…

…and that is why Moore’s typical leftist cult following has turned on him so aggressively – facts don’t fit their narratives and cognitive dissonance is not a safe space.

Michael Moore’s “Fahrenheit 11/9” Aims Not at Trump But at Those Who Created the Conditions That Led to His Rise, by Glenn Greenwald

This movie has got to be better than another comic book film. From Glenn Greenwald at the intercept.com: 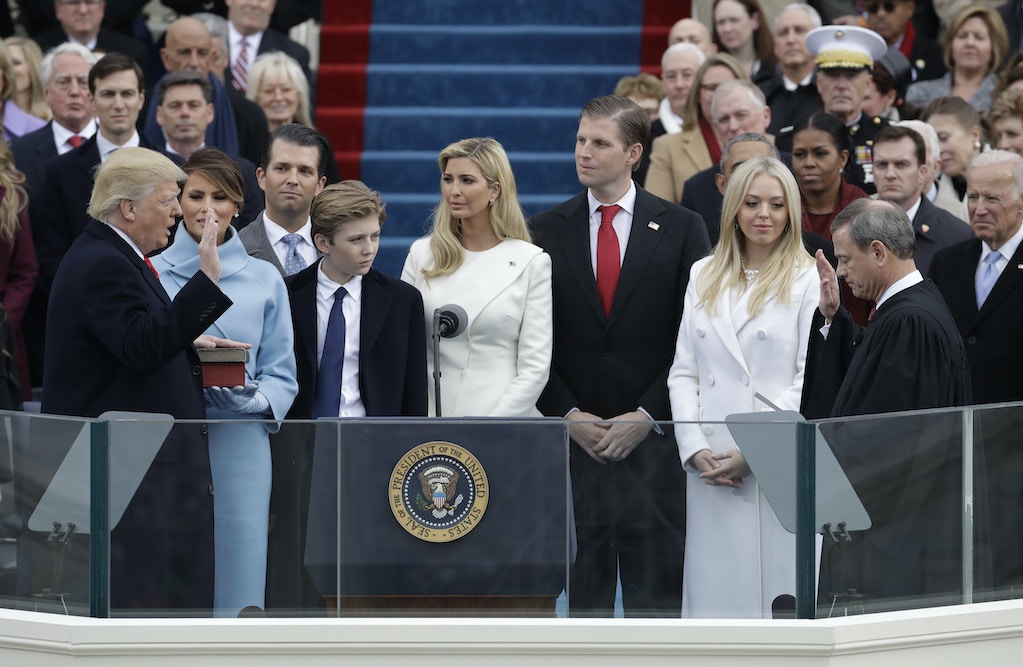 Donald Trump is sworn in as the 45th president of the United States by Chief Justice John Roberts during the 58th Presidential Inauguration at the U.S. Capitol in Washington D.C., on Jan. 20, 2017.

“FAHRENHEIT 11/9,” the title of Michael Moore’s new film that opens today in theaters, is an obvious play on the title of his wildly profitable Bush-era “Fahrenheit 9/11,” but also a reference to the date of Donald J. Trump’s 2016 election victory. Despite that, Trump himself is a secondary figure in Moore’s film, which is far more focused on the far more relevant and interesting questions of what – and, critically, who – created the climate in which someone like Trump could occupy the Oval Office.For that reason alone, Moore’s film is highly worthwhile regardless of where one falls on the political spectrum. The single most significant defect in U.S. political discourse is the monomaniacal focus on Trump himself, as though he is the cause – rather than the by-product and symptom – of decades-old systemic American pathologies.

END_OF_DOCUMENT_TOKEN_TO_BE_REPLACED

Does Michael Moore Matter Anymore? An Open Letter From One Filmmaker to Another, by Douglas Herman

“This is the true joy in life – being used for a purpose recognized by yourself as a mighty one: being thoroughly worn out before you are thrown on the scrap heap; being a force of nature instead of a feverish, selfish little clod of ailments and grievances complaining that the world will not devote itself to making you happy.” ~ George Bernard Shaw

Mike: I’m a fellow Michigander, a fellow filmmaker like yourself, raised with small town Midwestern values like the ones you claim to have. I’ve mostly applauded and admired your efforts in the past. Indeed, long before I became a filmmaker, I championed your documentary film, Fahrenheit 9/11. While working as an Alaska commercial fisherman, I lobbied the local theater owner, Rusty, to show the film there in Kodiak, Alaska in 2004. He said he despised you but I told him the Orpheum would be packed for several showings and he’d make a nice fat profit. And he did.

Speaking of nice fat profits, how’s your weight, buddy? You really should contact my friend Gillian Michael and get on a weight loss program. Maybe you could make a documentary while you do it. Call it High Fructose Snowflakes or Fast Food Fat Folks or something really fun and creative. Like that guy who made Supersize Me.

Sadly, in recent years, you’ve seemed to become almost a parody of yourself. Like a cartoon character or one of those loopy Saturday Night Live sketches that are more embarrassing than funny. Where, I wonder, is the old Mike Moore? The guy who tilted at windmills, who stood up to the powerful with homespun humor and a shaky camera? Indeed, the very same things you said to the auto industry in Roger and Me, years ago, are the very same things Donald Trump is saying to the auto industry today. Or so it seems to me.

Soon we’ll leave the election behind, but there was one guy, not a pundit by trade, and not a Trump supporter, who “got” this election and the forces behind the Trump vote—Michael Moore. This video, published October 27, outdid all the mainstream pundits and pollsters, and captured a lot of the anger propelling many Trump voters, especially in the industrial states that swung to Trump.