How long before people are subject to involuntary RFID injections? From Tyler Durden at zerohedge.com:

Wisconsin technology firm Three Square Market has injected 80 employees with their own brand of RFID microchips over the last year, and according to MIT Technology Review, “they love it.”

The implant, which is about the size of a grain of rice, utilizes Near Field Communication (NFC) technology, also found in credit cards, debit cards, key fobs, and smartphones. This technology is considered “passive,” meaning the microchip stores data that can be read by other devices but cannot read data themselves.

The chip’s applications are devilishly simple; from locked doors, to cashless commerce, to providing first responders with detailed medical information in the event of an emergency – the possibilities are seemingly endless.

“It’s just become such a part of my routine,” says VP of finance Steve Kassekert, who says he was miffed when the RFID reader on the vending machine went down a couple of months ago.

And sure, buried towards the end of the MTR article are concerns over security – such as the fact that anyone with an RFID reader can cozy up to a chipped individual and ping their implant to glean personal information. But hey – CEO Patrick McMullan points out that “similar personal information could be stolen from his wallet, too.”

You can even install them yourself…

Europe’s already with the program

As we reported in May, over 3,000 Swedes have implanted tiny microchips beneath their skin to replace their credit card information, identification, keys, train tickets, among other everyday items, according to Agence France-Press.

Governments in Europe quietly experimented with embedding the small chip in humans in 2015 in Sweden, and several other countries in the region, before the recent rollout.

“Swedes have gone on to be very active in microchipping, with scant debate about issues surrounding its use, in a country keen on new technology and where the sharing of personal information is held up as a sign of a transparent society,” AFP notes.

You probably didn’t know that many tires these days have embedded RFID chips that track your car. Read on. From Eric Peters at theburningplatform.com: 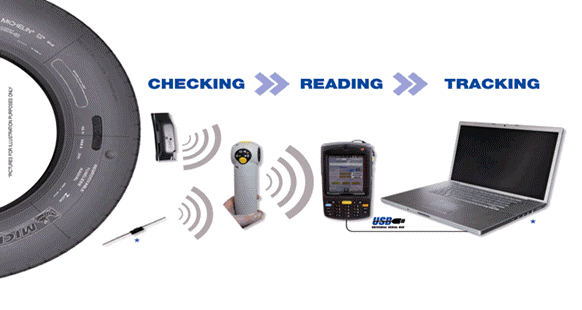 Tires are supposed to leave tracks – not track us.

Someone should tell the tire companies. Who aren’t telling us about the tracking devices they’re embedding in the tires they’re selling to us – and which can be used to keep track of our comings and goings without our even knowing about it, much less having consented to it.

The devices are called Radio Frequency Identification (RFID) tags – chips, really. They are extremely small buggers – about the size of a grain of rice or even smaller than that – and have been in general use since at least the early 2000s for what is blandly styled Automatic Identification and Data Capture. Which means that wherever the chipped item, animal – or person – is or has been or is going can be kept track of automatically and in perpetuity.

The chips are activated by scanners – and so don’t need an internal power source, such as a battery – which would eventually die. The chip can therefore remain active – or rather, capable of activation (and tracking) for years, possibly decades.

Ostensibly, they are used for inventory tracking.

But once you buy the tires, they become your property – at which point the manufacturer of the tire (and the retailer who sold you the tire) loses all rights to the tire, including the right to track the tire, or use the tire to track you. 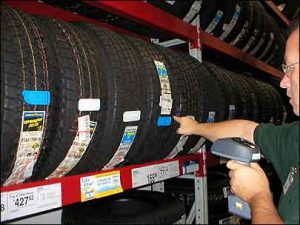 At the moment of purchase – of transfer of ownership – the RFID chip in the tires ought to be rendered automatically inert, so they can no longer be used to keep track of your tires. Or your comings and goings. Unless you specifically agree otherwise.

China gets creepier and creepier. From Tyler Durden at zerohedge.com:

China, the world’s most populous country, continues to devise new methods of keeping tabs on its 1.4 billion citizens. And after the Wall Street Journal reported earlier this week about a powerful new spy camera devised by a team of researchers at Duke University who had, incidentally, received funding from the US government, America’s business newspaper of record is back Wednesday with another stunning report, this time about how China is establishing a new system to track cars using electronic tags. Indeed, WSJ describes the plan to “improve public security”, which will also purportedly help ease extreme congestion in the largest Chinese cities.

The plan, which is set to be rolled out by July 1, will rely on chips that can be identified thanks to their unique radio frequency signature. Compliance will be voluntary at first, but it will become mandatory for all new vehicles by Jan. 2019.

Of course, the plan will dramatically expand China’s ability to track its citizens’ every move – something that’s becoming increasingly important as Chinese authorities seek to implement their “social credit score.”

China’s surveillance network already includes powerful cameras that can detect an individual’s facial features from 100 yards away, according to WSJ. Meanwhile, the program will have a serious impact on China’s automotive industry, which is feeding the world’s biggest market, with nearly 30 million vehicles expected to be sold this year.

“It’s all happening in the backdrop of this pretty authoritarian government,” said Ben Green, a fellow at Harvard University’s Berkman Klein Center for Internet and Society who is researching use of data and technology by city governments. “It’s really hard to imagine that the primary use case is not law enforcement surveillance and other forms of social control.”

How far are we from the day when everyone is microchipped at birth? Probably just a few years. From Tyler Durden at zerohedge.com:

We’ve all been warned that it is coming, but as SHTFPlan.com’s Mac Slavo notes, what is disturbing is that while technology surrounds us and *some* have concerns about privacy, most shrug at the massive amounts of data they are collecting about our lives, and the incredible level of control the system now has over each individual.

This bill passed, clinging to the broadest base of “good intentions” that it could muster, i.e. caring for those with disabilities and decline with age.

But in reality, it is a nose under the tent for a system that needs the ability to microchip dissenters, and to force cooperation on the part of the general population. In effect, everyone is now under their thumb with this, because anyone could doesn’t go along with the mass conditioning will be labeled ‘mentally –––’ and branded with a track-and-control chip. Game over.

At the first sign of suspicious behavior, or troubling social media profile, or a misunderstanding during an encounter, police and medical personnel – among others – will have the authority to declare someone ‘mentally disabled’ (or incapacitated, or temporarily insane, or unsound of mind, or whatever label is handy) just because they express discontent, anger or outage at the state of the world and political affairs. “Fake news” journalists can be shut down, and “conspiracy minded” individuals controlled… and of course, it will be abused. The tactics used against parents by CPS will be forged together with the creepy total surveillance of the fusion centers, etc. Potentially a very nasty police state.

This power will expand, and try again if it is slowed down or rejected. Whether it takes the form of an implanted chip, or a tracking number that is tied to each person, they will stop at nothing short of mark in everyone with identity tied to bank accounts, etc. They will insist you be on the grid in every way… and with this bill, they just got one step closer to controlling the future. All this has been foretold, and yet it is beyond anything anyone could have imagined.