What Looms Behind, by James Howard Kunstler

Are we running out of fuel and technology? From James Howard Kunstler at kunstler.com:

Don’t hold your breath waiting for a coherent pre-election debate about the mother-of-all-issues facing this republic, namely, that we can’t afford the living arrangements Americans think of as “normal” anymore. This quandary has stalked us since the millennium turned. It thunders through all the activities of daily life, and the tensions emanating from it are so agonizing and difficult to face that our politics have deflected off into the kind of hysteria spawned by bad dreams.

As the great Wendell Berry pointed out years ago, this is about the nation’s home economics: energy and resources in, production out, surplus wealth saved. America had a brush with reality in 2008 when all the distortions of our home economics came together and whapped the country between the eyes with a two-by-four. Our energy-in was faltering. US oil production had fallen to a new low of under 4 million barrels a day and we were importing around 15 million. We papered over the problem with borrowed money in ever-larger amounts. This dynamic prompted ever riskier work-arounds on Wall Street, especially “innovations” in securitized debt, which invited criminal shenanigans. It blew up badly. Wealth vaporized. Industries collapsed. Homes and jobs were lost. Lives ruined.

The fairy-tale narrative since then is that technology rode to the rescue. The shale oil miracle “solved” the energy-in problem. Sure seems like it. But lots of things aren’t what they seem to be. Shale oil was a neat stunt. Turns out you can produce a helluva lot of it by paying more to pull it out the ground than you get from selling it. You can goose the process nicely by paying for it with borrowed money. And so it has gone. America now produces a new record of over 12 million barrels a day, and most of the companies doing it can’t make a red cent. And since it is increasingly obvious that they won’t ever pay back the money they borrowed before, they are unlikely to get new loans to continue their profitless operations. 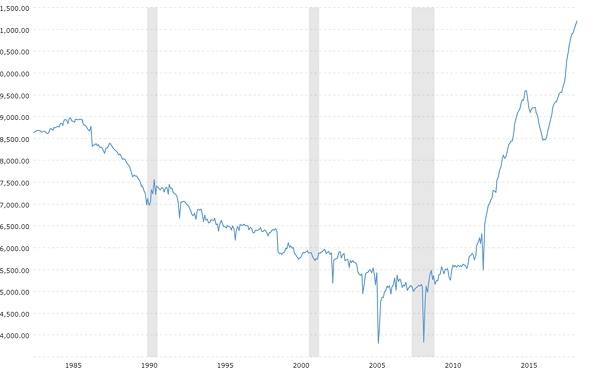 Chart by The Motley Fool

Notice how rapidly shale oil production shot up after 2008. It’s worth a peek at analyst Steve St. Angelo’s latest essay on shale oil company debt (Finance Costs Are Killing the Shale Industry) to understand just how this stunt worked. As blogger Tim Morgan at Surplus Energy Economics points out, the dis-economics of  energy production — and shale oil in particular — are stealthily damaging everyday life: “…the world economy is already suffering from these effects, and these have prompted the adoption of successively riskier forms of financial manipulation in a failed effort to sustain economic ‘normality.’”

That tells you exactly why the stock markets are at record highs now, along with US oil production. What the nation doesn’t get is that the shale oil industry is sure to collapse, and at least as rapidly as it shot up. So, expect the stock markets to collapse with it, along with tremendous collateral damage to all the other instruments that represent “money” — bonds, currencies, and their derivatives. It will make the 2008 episode look like a mere overturned poker table when it happens. In the meantime, many of the activities enabled by the oil industry are wrecking the planet, not just CO2 emissions, but the plastics and chemical industries especially. So, the oil quandary bites at both ends: damned if it quits on us and damned if it keeps going.

That’s the main issue of our time. We’re faced with the imminent and rather drastic re-organization of everyday life in America without oil. It should be reasonable to assume that the process will be disorderly, and the longer we ignore it, the more disorderly it will be. Granted, it is a tall order for politicians to talk about things this scary. The hard truth is that intelligent responses to this quandary would require heroic effort and painful change — and would probably be emotionally unacceptable to voters. It would entail the dismantling of suburbia and all of the activities associated with it, a severe shrinking of government at every level, the abandonment of most of our military playthings and overseas commitments, a wholesale overturning of Agri-Biz as currently practiced (along with a transition to smaller scale farming with a much higher percentage of the population working at it), and a stupefying aggregate loss of perceived wealth.

I’m describing events that go far beyond the common understanding of political revolution — though these discontinuities will surely produce political and social strife of a high order. This mega-issue and its spinoffs are what looms behind all the pitiful political comedy of the moment, especially the incendiary buffooneries of race and “gender.” Ponder this as you read the latest New York Times sponsored melodramas about “white supremacy” and the unfair pay in women’s soccer tournaments.