The best ad for guns is a video of any Democrat talking about gun control. From Roger L. Simon at theepochtimes.com: 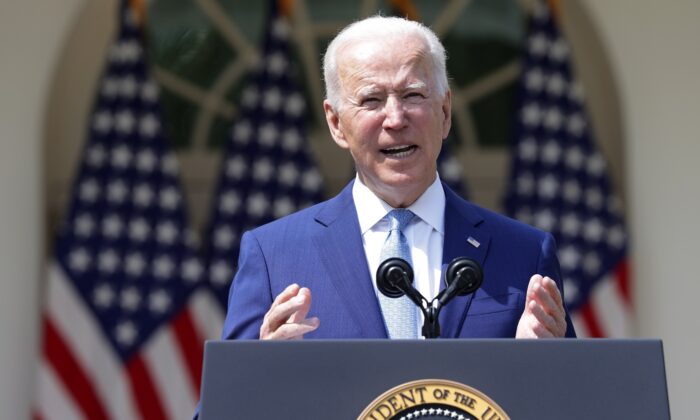 President Joe Biden speaks during an event on gun control in the Rose Garden at the White House in Washington on April 8, 2021. (Alex Wong/Getty Images)

With his new—most likely unconstitutional—executive orders regarding weapons, Joe Biden is cementing his place as America’s leading gun salesman.

Gun sales have been wildly up all year. He just pushed them to a new level.

It’s almost as if he were marketing director for Smith & Wesson.

(As America’s president he might have made that clear to prevent people from running out to buy yet more Austrian-made Glocks when the locally-produced version is arguably as good.)

The hypocrisy of this doddering man who threatened to punch out Donald Trump is nothing short of monumental.

Any sentient being—not a slavish, ultra-conformist Democrat who no longer thinks for him or herself—has been alarmed at the escalating violence in our streets.

This is all thanks to our Democrat friends many of whom seek to defund and/or handcuff the police, even, in some cases, after the latest group of self-described revolutionary maniacs has decided to torch their house.

But the president wants to disarm us. Hello, Germany 1938.

The measure of this hypocrisy can be seen in the treatment of those who breached the Capitol on Jan. 6—many of whom are still incarcerated without bail, including those with no criminal record whatsoever, none of whom (nota bene) had guns of any sort, not even a Derringer tucked in a boot—compared with the treatment of Antifa and Black Lives Matter demonstrators.

The latter, always thugs in the Antifa case and too often thugs in the BLM case, almost always get off and got off “Scot Free” after committing true acts of violence and mayhem that dwarf anything that happened in the Capitol.

We can easily mock the usual liberal virtue signaling about guns going on here, but one of Mr. Biden’s proposals is particularly alarming because superficially attractive to many.

He has directed the Department of Justice to publish model “red flag” legislation for the states. Those are laws that allow family members, police, and possibly others to ask a court to bar an individual from possessing firearms if he or she seems to be dangerous to themselves or others.

We might call this the “Stasi Law” because it encourages us to snitch on each other in the manner of East Germany under their Stasi, the most ruthless of all communist intelligence agencies before the fall of the Iron Curtain.

If you have seen the brilliant German film “The Lives of Others,” you know how it worked. (If you haven’t, download this movie now. It’s the most relevant political film made in the last twenty-five years.)

And speaking of the cinema, it used to be in the old Hollywood movies the snitch was considered an oily villain who got his just deserts. Unamerican, really. Nowadays, we’re headed in the opposite direction, not just in film, but in our society.

This “snitchery” is already here. I recently heard the story of some Tennessee people who were warned by their own parents not to visit them in Pennsylvania because the parents’ neighbor would report a Tennessee license plate in their driveway—such interstate fraternization being verboten (I assume we all know that German word from World War II flicks) in Pennsylvania because of COVID.

The possibilities for similar behavior with “red flag” legislation are endless—children ratting on their parents and so forth—just as are the ramifications from vaccination passports.

We live in a different world.

In case you want to buy Smith & Wesson stock, it trades on the NASDAQ as SWBI. It’s down today a touch. You know what they say—buy on the dip.

Roger L. Simon is an award-winning novelist, Oscar-nominated screenwriter, co-founder of PJMedia, and now, editor-at-large for The Epoch Times. His most recent books are “The GOAT” (fiction) and “I Know Best: How Moral Narcissism Is Destroying Our Republic, If It Hasn’t Already” (nonfiction). He can be found on Parler as @rogerlsimon.