Much wants more and loses all, by Gefira

That the Russians are going to depose Vladimir Putin over the war with Ukraine is a pipe dream. The Russians have lived under authoritarians and dictators for over a century and have endured two world wars that decimated their country. From Gefira at gefira.org: 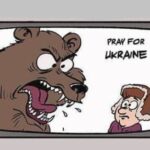 The collective post-West has been running amok for the last two weeks. The powers that be make believe that they did not expect that events would unfold the way they are unfolding now (though they did their best to make things happen as they are happening) and they make a show imposing sanctions on the aggressor and assuring the populace that the aggressor sooner or later will cave in. There is yet a third aspect to the phenomenon: the same powers that be want the people to forget that merely twenty years back they themselves assaulted Yugoslavia/Serbia, used missiles with depleted uranium, bombed cities and shot at civilians. Of course, that earlier event was a humanitarian action while the current one is a brutal act of aggression, but we digress.

Now there is a big misconception on the part of the post-West about Russia. If the Western media claim the Russian people are against the war or that the Russian people are about to rebel and overthrow President Putin, then they are either delusional or lying through their teeth. Reality is something that refuses to obey our wishes. The Russian people have rallied around their president and and their authorities; the Russian people – unlike citizens of the post-Western countries – are patriotic and ready to sacrifice themselves in defence of their fatherland. Western sanctions? The post-West may withdraw businesses and impose sanctions on Russian oligarchs, which is music to the ears of the Russian people. They resented Western dominance anyway and they will be more than happy to see the oligarchs mopped up from their society. Russians view the hostilities as a repeat of the Great Patriotic War of 1941-1945. Contrary to what has been done to the Western collective mentality, the Russian authorities under Vladimir Putin took great efforts to raise Russia’s citizens in patriotic values. Russians are going to win because they do not care about money so much as the West does. That’s one big misconception that Western people have about their opponents from the East.

It is the West that cannot imagine a life without money and the resultant luxuries. Sanctions or no sanctions, Western companies will sooner or later (I bet: sooner) resume business with Russia because – as everybody in the West knows – “money makes the world go round”. No less a person than Comrade Lenin famously said: capitalists will sell us the rope with which we will make a noose to hang them. And so they will, make no bones about it.

Yes, the West is ready to go to war with Russia so long as it has… Ukrainian, Polish, Romanian, Lithuanian, Latvian or Estonian soldiers at its disposal. The moment the West runs out of those soldiers, its leaders will go back to the negotiating table with the Kremlin. Do you want any evidence? Here you are.

A few days ago Americans tried to set Poland against Russia in that they suggested to Warsaw that it send Soviet-made MiG aircraft to Ukraine. Though the Polish authorities usually oblige the West’s wishes, this time they had second thoughts about the proposal and replied that they were ready to send the said aircraft to the American air base in Rammstein so that Americans could pass them over to Kiev. And you know what? Washington was beside itself with annoyance! You see? The dog was expected to bite the bear, with the dog’s owner watching from the sidelines and biding his time.

One response to “Much wants more and loses all, by Gefira”