The left’s reaction to Elon Musk’s buyout of Twitter is nothing but extreme hypocrisy. The company may be escaping the leftist playpen Silicon Valley has become. From Victor Davis Hanson at zerohedge.com:

Elon Musk has finally managed to buy Twitter. And the moment he did, the enraged Left flipped out. 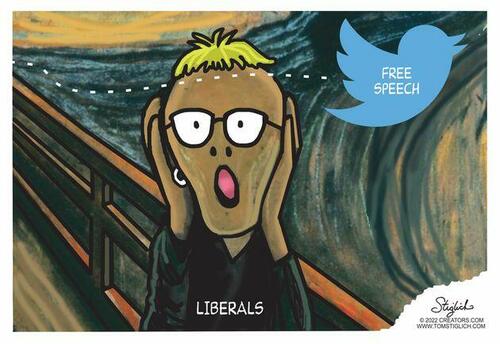 Abruptly leftists began trashing their favorite electronic communications platform as the domain of the nation’s elite, professional classes. Had they just discovered that they had been racists and privileged users all this time?

And what happened to the Left’s former worship of Musk as the man who revolutionized the clean, green automobile industry with his Tesla electric car company?

Or Musk the space revolutionary and hip star trekker, who with his own money helped ensure the United States remains preeminent in space exploration?

Or Musk, the patriot who is providing free next-generation internet service to the underdog Ukrainians fighting Russians for their lives?

No matter. The Left reviles Musk because he has announced that Twitter will be the one social-media platform whose business is not to censor or massage free speech in an otherwise monopolist, intolerant, and hard-Left Silicon Valley.