When you rely on the government, it can exact just about any price it wants. From Chris MacIntosh at internationalman.com:

“This work was strictly voluntary, but any animal that absented himself from it would have his rations reduced by half.”

Everything is now political.

ESG, climate change, racism, gender, vaccines. Ask yourself why is it that  all of these things are non-negotiable? Why can’t they be discussed? Why is there no room for dissent, questioning, and discourse?

Something is amiss. Think about it.

The pointy shoes at the IMF tell us that the pandemic will cost the world $28 trillion by 2025, which means it’ll be much, much more.

The truth is the pandemic isn’t the cause. The lockdowns, however, are.

Understanding what exactly this “pandemic” is, is really critical to understanding everything taking place globally and in financial markets both now and in the future.

This virus is statistically as dangerous to the population as a bad flu. “No, not possible, Chris. Look at the response by governments. Surely that’s disproportionate.” Yes, it is, but there is a reason.

To understand the answer to this more fully we need to go back to 2008 and then walk forward tracking the unfolding events.

Following the housing crash and subsequent banking crisis QE was brought in as the tool to “fix” what could have and should have been fixed by letting the banks fail and putting on trial and jailing Wall Street bankers as well as regulatory agencies who were all willfully and knowingly involved in a massive fraud.

The economy has been hanging by a thread ever since.

Then in 2019 the money market seized up with the overnight lending rate shooting up, causing the pointy shoes at the Fed (and the ECB in coordination with the BOE, too) to step in to “fix” it.

They printed upwards of 100 million smackaroos PER NIGHT. 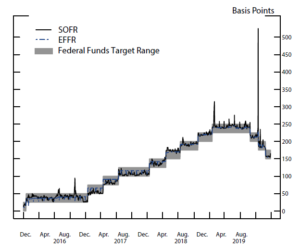 Here’s an easy way to tell if your bank is actually safe, by Simon Black

Banks lend out most of the money deposited with them. This makes them an inherently risky proposition, and if you think government regulation and deposit insurance solve that problem, think again. From Simon Black at sovereignman.com:

March 15, 2013 was a pretty normal day in Cyprus. It was a Friday, and most people were looking forward to a relaxing weekend.

The next morning the entire nation woke up in horror. Their politicians had been up all night, negotiating with international lenders to provide an emergency loan to the country, and its banks.

It turned out that the banks in Cyprus were all insolvent; just like banks in the United States during the 2008 sub-prime crisis, banks in Cyprus had been making idiotic decisions with their customers’ hard-earned savings.

Unfortunately for depositors, the government of Cyprus was also broke, and they were unable to bail out the banks.

END_OF_DOCUMENT_TOKEN_TO_BE_REPLACED

From Mark Gilbert at bloombergview.com:

As Europe belatedly gets around to repairing its weakest banks, investors who have lent to financial institutions by buying bonds face a brave new world. Their money can effectively be confiscated to plug balance-sheet holes. Recent events in Portugal suggest that the authorities should be wary of treating bondholders as piggybanks, or risk destroying a key source of future funds for the finance industry.

Let’s begin with the “what” before we get to the “why.” Here’s what happened to the prices of five Portuguese bank bonds in the past few days:

Picture the scene. You left the office on Dec. 29 owning Portuguese bank debt that was trading at about 94 percent of face value. In less than 24 hours, you lost 80 percent of your money. So what happened?

This is a story with ominous historical parallels. From zerohedge.com:

Slowly, all the lies of the “recovery”, all the skeletons in the closet, and all the bodies swept under the rug are emerging.

Moments ago, Austrian ORF reported that there have been “spectacular developments” in the case of the Hypo Alpe Adria bad bank, also known as the Heta Asset Resolution, where an outside audit of Heta’s balance sheet exposed a capital hole of up to 7.6 billion euros ($8.51 billion) which the government was not prepared to fill, the Austrian Financial Market Authority said.

As a result, according to Reuters, the bad bank that was created in the aftermath of the Hypo collapse, is itself about to be unwound, as the bad bank itself goes bad!

“Austria’s Financial Market Authority stepped in on Sunday to wind down “bad bank” Heta Asset Resolution and imposed a moratorium on debt repayments by the vehicle set up last year from the remnants of defunct lender Hypo Alpe Adria.”
In short: Austria just cut off state support of what was until this moment a state-backed, wind-down vehicle and a key pillar of trust in what was already a shaky financial system.

Not surprisingly, today’s shock announcement comes a week after Austria’s Standard reported that up to a five billion euro impairment at Heta would take place, a report which the Finance Ministry called “pure speculation” and noted that the Bank was in good health. According to Standard, among the reasons for the massive capital shortfall was the plunge in collateral as a result of the continuing crisis in South East Europe which meant that the value of “real estate in South East Europe, shopping centers and tourism projects, deteriorated massively” driven largely by the appreciation of the Swiss Franc. “As a result, the volume of bad loans has increased significantly.”

Everyone was wondering who the first big casualty of the SNB’s currency peg failure would be. We now know the answer.

Further from Reuters, the finance ministry confirmed this in a statement, adding Heta was not insolvent and that debt guarantees by Hypo’s home province of Carinthia and the federal government were unaffected by the move.

The problem is that going forward that nobody knows who insures what, what various other state and quasi-state guarantors suddenly unclear as to who is responsible for what: the province of Carinthia guarantees back €10.7 billion worth of Heta debt. The federal government backs a 1 billion euro bond issued in 2012 that the ministry said would be honored in full.

As a result of the “sudden” capital deficiency, there will be a moratorium on repayment of principal and capital lasts until May 31, 2016, giving the FMA time to work out a detailed plan to ensure equal treatment of all creditors, the FMA said in a decree published on its website.

Perhaps a badder bank to rescue the bad bank?

According to Reuters calculations, More than 9.8 billion euros worth of debt is affected, including senior notes worth 450 million due on March 6 and 500 million on March 20.

But the punchline, is that while the world was waiting for Greece to announce capital controls, or a bail-in over the past week, it was none other than one of the Europe’s most pristeen credits (one which until recently was rated AAA/Aaa) that informed creditors a bail-in is imminent: “The finance ministry noted that creditors can be forced to contribute to the costs of winding down Heta – or “bailed in” – under new European legislation that Austria adopted this year so that taxpayers do not have to shoulder the entire burden.”

Bloomberg confirms that the ministry announced that under new EU rules means creditors can be forced to share losses.

Of course, this being Austria, and the Creditanstalt, aka the bank which failed in 1931 under almost identical circumstances and set off the dominos that led to a global financial crisis which in turn bank fanned the flames of the Great Depression, also being Austrian, suddenly everyone is asking: “what just happened and what happens next?”