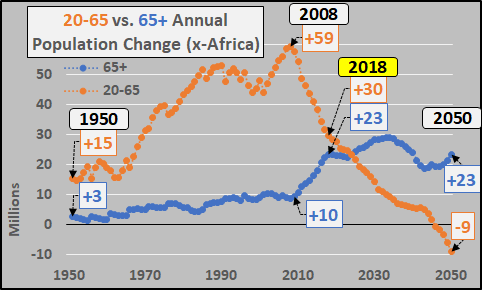 How Big Of A “Deleveraging” Are We Talking About? by Lance Roberts

How debt turns a healthy economy into a sick one, from Lance Roberts at realinvestmentadvice.com:

Last week, I discussed the issue of debt and why “people buy payments.” This article generated much discussion and several emails including the following.

This is essentially the “causation” or “correlation” argument which has been a point of contentious debate over the last several years as debt levels in the U.S. have soared higher.

One of the primary problems, not only in the U.S., but globally, is that government spending has shifted away from productive investments that create jobs (infrastructure and development) to primarily social welfare and debt service which has a negative rate of return. According to the Center On Budget & Policy Priorities, nearly 75% of every tax dollar goes to non-productive spending.

Here is the real kicker, though. In the first quarter of 2017, the Federal Government spent $4.27 Trillion which was equivalent to 22.45% of the nation’s entire GDP. Of that total spending, $3.61 Trillion was financed by Federal revenues and $660 billion was financed through debt. In other words, it took almost all of the revenue received by the Government just to cover social welfare and service interest on the debt.

Debt Is The Cause, Not The Cure

Debt, if used for productive investments, can be a solution to stimulating economic growth in the short-term. However, in the U.S., debt has been squandered on increases in social welfare programs and debt service which has an effective negative return on investment. Therefore, the larger the balance of debt becomes, the more economically destructive it is by diverting an ever growing amount of dollars away from productive investments to service payments.

The relevance of debt growth versus economic growth is all too evident as shown below. Since 1980, the overall increase in debt has surged to levels that currently usurp the entirety of economic growth. With economic growth rates now at the lowest levels on record, the growth in debt continues to divert more tax dollars away from productive investments into the service of debt and social welfare.

(Note: I have not included the beginning of the Trump Presidency yet because the debt ceiling remains frozen. When the debt ceiling is lifted and the current ACTUAL debt is reflected, I will revise accordingly.)

It now requires nearly $3.00 of debt to create $1 of economic growth.

To continue reading: How Big Of A “Deleveraging” Are We Talking About?