The fate of an empire’s currency generally mirrors the general fate of the empire. From Egon von Greyerz at goldswitzerland.com:

The final phase of Empires normally ends with the same signals whether it was 2000 years ago in Rome or  today in the US.

One of the first signs is losing wars together with excessive debts, deficits, devaluations and decadence  The US being defeated and hurriedly fleeing from Afghanistan in a few days clearly signifies the end of the US empire.

The mighty US military has in the last few decades conducted disastrous wars against very small countries with no big armies or weaponry. Vietnam, Iraq, Libya and Afghanistan come to mind but there are many more as we show below.

Brown’s University has just made a study of the US cost of wars since 9/11. They arrive at a staggering $8 trillion and the loss of 900,000 lives .

So in the last 20 years, the US has spent $8 trillion or 40% of annual GDP on conducting totally unsuccessful wars. The report also states that even after the exodus from Afghanistan the US is still involved in wars in over 80 countries.

The cost of being involved in some kind of war activity in 85 countries will continue to cost the dying US empire dearly for decades to come.

Billionaire hedge fund manager urges diversification out of the dollar, by Simon Black

Why would you want to stay in a currency its sponsors are hell-bent on debasing? From Simon Black at sovereignman.com: 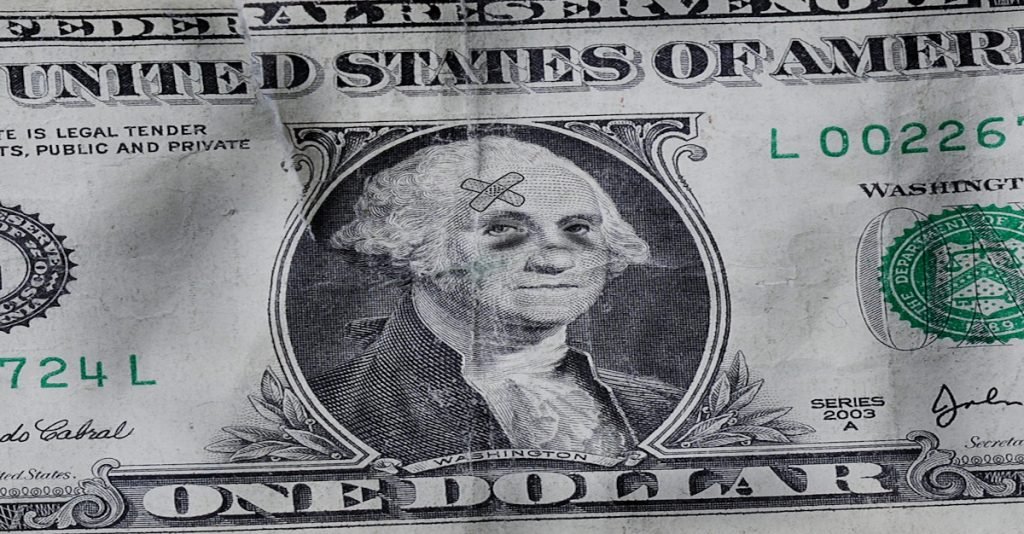 Ray Dalio is the founder of one of the largest investment firms in the world and has amassed a personal fortune nearing $20 billion from his business and investment acumen.

In short, he understands money and finance in way that most people never will. And it’s for this reason that his latest insights are so noteworthy.

In a recent, self-published article entitled “Why in the World Would You Own Bonds When. . .”, Dalio makes some blunt assertions about the alarming US national debt, the decline of the dollar, and other negative trends in the Land of the Free.

Here’s a summary of the major points:

1) Interest rates are now so low that “investing in bonds (and most financial assets) has become stupid.”

Dalio points out that bond yields are so low today that investors would essentially have to wait more than 500 years to break even on their bond investments after adjusting for inflation.

That’s why sensible people are already ditching the bond market.

JP Morgan’s CEO Jamie Dimon recently said he wouldn’t touch a US government 10-year Treasury Note “with a ten foot pole.” Neither would Dalio, as he told Bloomberg this month.

2) This is a big problem for Uncle Sam. Investors are ditching US government bonds at a time when the US is “overspending and overborrowing”.

They just passed a $1.9 trillion stimulus, and they have another $3 trillion spending package ready to go, plus plenty of momentum for Universal Basic Income, health care, Green New Deal, and just about everything else.

In short, the government is going to have to sell a LOT of bonds (i.e. increase the debt) at a time when investing in bonds has become stupid.

There’s a Serious Flaw to the Team Powell-Yellen Inflation Scheme, by MN Gordon

There’s too much debt for the government ever to repay it, so the Federal Reserve wants to debase the currency and inflate it away. However, it was dollar debasement that got us here in the first place—federal debt has skyrocketed since Nixon finished taking the US off the gold standard. From MN Gordon at economic prism.com:

If you’re a wage earner, retiree, or a lowly saver, your wealth is in imminent danger.

A lifetime of schlepping and saving could be rapidly vaporized over the next several years.  In fact, the forces towards this end have already been set in motion.

Indeed, there are many forces at work.  But at the moment, the force above all forces is the extreme levels of money printing being jointly carried out by the Federal Reserve and the U.S. Treasury.

Fed Chairman Jay Powell and Treasury Secretary Janet Yellen have linked arms to crank up the printing presses in tandem.

This is what’s driving markets to price things – from copper to digital NFT art – in strange and shocking ways.  But what’s behind the money printing?

As far as we can tell, $28 trillion is a really big number…even in the year 2021.  How do we know it’s a big number, aside from counting the twelve zeros that fall after the 28?

We know $28 trillion is a big number based on our everyday experience using dollars to buy goods and services.  You can still buy a lot of stuff with $28 trillion.  In truth, $28 trillion is so big it’s hard to comprehend.

Nonetheless, $28 trillion is not as big a number today as it was in 1950.  Back then, the relative bigness of $28 trillion was much larger.  It was unfathomable.