America’s Imperial Expenditures and Escapades Are Stranger Than Fiction, by Danny Sjursen

The only thing weirder than the US’s military and intelligence misadventures is the bookkeeping and accounting fun and games that go along with them. From Danny Sjursen at antiwar.com:

Who needs dystopian novelists or absurd satirists when otherwise banal bureaucrats of the U.S. national security state do the job for them? It’s an old story with a new tech-savvy twist. The late great Joseph Heller knew a thing or two about war’s foundational farce. He joined the army air corps at age 19 and flew 60 combat missions as a bombardier on World War II’s Italian front.

In his classic 1961 novel Catch-22, his wounded protagonist lamented that “outside the hospital the war was still going on. Men went mad and were rewarded with medals.” Yet in today’s confusing modern twist, with the citizenry and even soldiery now opposing America’s endless wars, the only men going mad are inside Washington. Even now they’re looking for reasons to keep awarding medals to overtaxed and unenthused overseas warriors.

It makes for a strange state of affairs here in year 20 of the crusade formerly known as the “war on terror.” Just last week, two assumedly unrelated stories offered case studies (or are they clinics) in America’s national security politics and procedures of absurdity.

First, there was a passing annual footnote in the Pentagon’s bland bureaucratic budget line.

Part of that military budget goes to what DefenseNews labeled the “Pentagon’s secret intelligence fund” – last year they went with “black intel funding.” Its officially titled the more mundane Military Intelligence Program, or MIP. Last week’s obligatory announcement was that Congress appropriated $23.1 billion for its operations in fiscal year 2020, a nine year high. In fact, the boys on the Hill tacked on a $100 million dollar bonus on top of the Pentagon’s request. So super sleuth are the MIP’s black ops, that the DOD waits until after the fiscal year to admit how many tax dollars unknowingly funded missions the tax-payers aren’t allowed to know about.

What should be done with a department that can’t pass a basic audit? Raise its budget, of course. From Matt Taibbi at rollingstone.com: 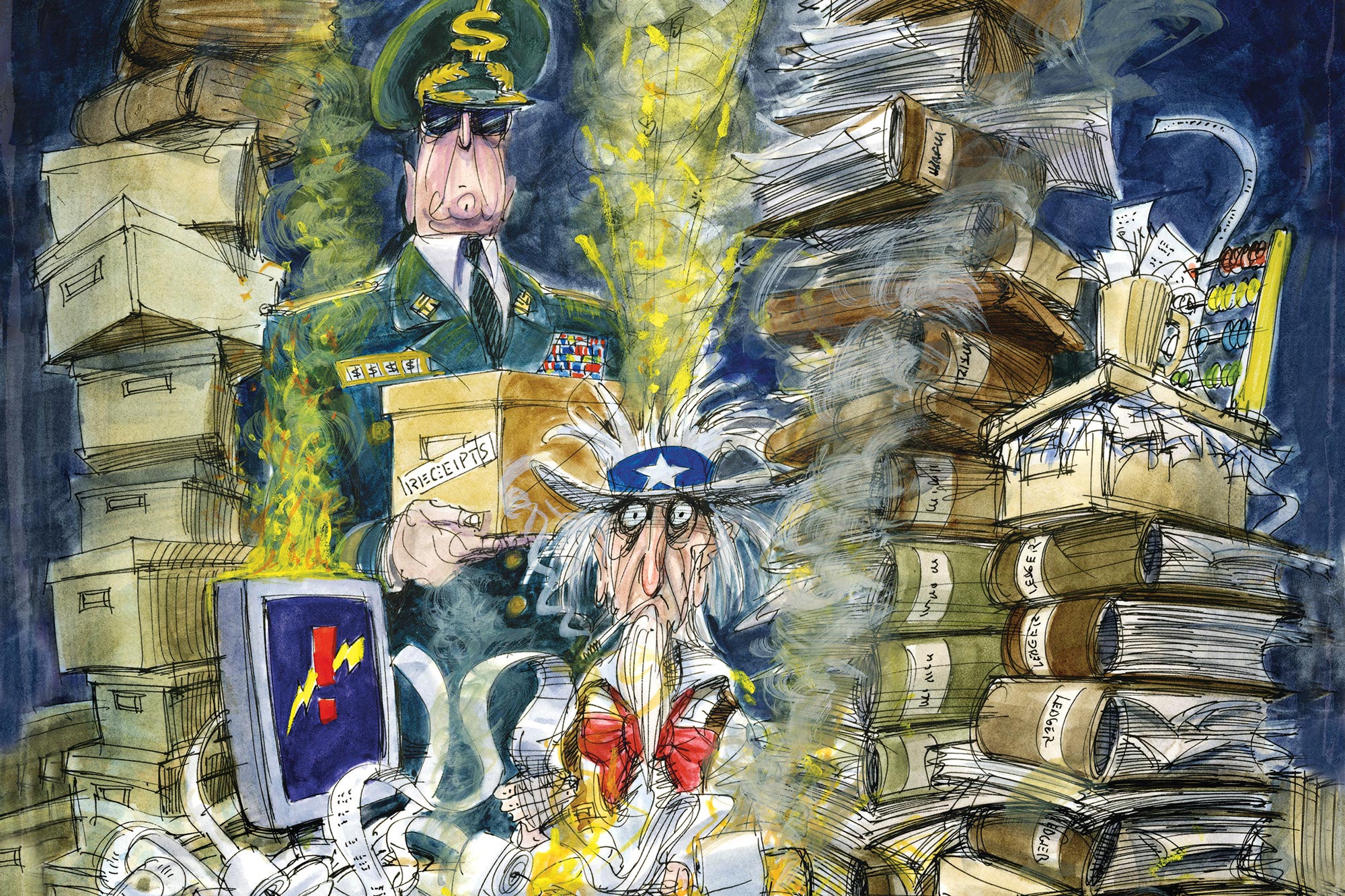 A retired Air Force auditor — we’ll call him Andy — tells a story about a thing that happened at Ogden Air Force Base, Utah. Sometime in early 2001, something went wrong with a base inventory order. Andy thinks it was a simple data-entry error. “Someone ordered five of something,” he says, “and it came out as an order for 999,000.” He laughs. “It was probably just something the machine defaulted to. Type in an order for a part the wrong way, and it comes out all frickin’ nines in every field.” Nobody actually delivered a monster load of parts. But the faulty transaction — the paper trail for a phantom inventory adjustment never made — started moving through the Air Force’s maze of internal accounting systems anyway. A junior-level logistics officer caught it before it went out of house. Andy remembers the incident because, as a souvenir, he kept the June 28th, 2001, email that circulated about it in the Air Force accounting world, in which the dollar value of the error was discussed.

The Air Force, which had an $85 billion budget that year, nearly created in one stroke an accounting error more than a third the size of the U.S. GDP, which was just over $10 trillion in 2001. Nobody lost money. It was just a paper error, one that was caught.

“Even the Air Force notices a trillion-dollar error,” Andy says with a laugh. “Now, if it had been a billion, it might have gone through.”

Years later, Andy watched as another massive accounting issue made its way into the military bureaucracy. The Air Force changed one of its financial reporting systems, and after the change, the service showed a negative number for inventory — everything from engine cores to landing gear — in transit.

When Dollars and Cents Trump Any Kind of Sense, by Chris Henrikson

Why the US doesn’t need to spend anywhere near what it’s spending on its military. From Chris Henrikson at antiwar.com:

There it is. Three quarters of a trillion dollars in a single annual military budget. Congress even passed it before the start of the fiscal year, to boot.

Listening to the first episode of “Net Assessment”, a podcast by the folks at War on the Rocks, I heard that they were going to dissect an article by Professor Adrian Lewis at Task & Purpose. Having already read the article, I was hoping that the podcasters might have some new insights to share. The article begins with Professor Lewis overhearing some criticism from his colleagues at the University of Kansas towards the military, specifically of the defense budget, and him outlining that these fellow professors are living in a informational “ivory tower”, not seeing the huge “benefits” that the military bestows on American society.

END_OF_DOCUMENT_TOKEN_TO_BE_REPLACED

The Hidden Costs of “National Security”, by William Hartung

The actual dollars spent per year on national security are about 60 percent higher than the numbers generally cited in the mainstream media. From William Hartung at tom dispatch.com:

Ten Ways Your Tax Dollars Pay for War — Past, Present, and Future

You wouldn’t know it, based on the endless cries for more money coming from the military, politicians, and the president, but these are the best of times for the Pentagon.  Spending on the Department of Defense alone is already well in excess of half a trillion dollars a year and counting.  Adjusted for inflation, that means it’s higher than at the height of President Ronald Reagan’s massive buildup of the 1980s and is now nearing the post-World War II funding peak.  And yet that’s barely half the story.  There are hundreds of billions of dollars in “defense” spending that aren’t even counted in the Pentagon budget.

Under the circumstances, laying all this out in grisly detail — and believe me, when you dive into the figures, they couldn’t be grislier — is the only way to offer a better sense of the true costs of our wars past, present, and future, and of the funding that is the lifeblood of the national security state.  When you do that, you end up with no less than 10 categories of national security spending (only one of which is the Pentagon budget).  So steel yourself for a tour of our nation’s trillion-dollar-plus “national security” budget. Given the Pentagon’s penchant for wasting money and our government’s record of engaging in dangerously misguided wars without end, it’s clear that a large portion of this massive investment of taxpayer dollars isn’t making anyone any safer.

1) The Pentagon Budget: The Pentagon’s “base” or regular budget contains the costs of the peacetime training, arming, and operation of the U.S. military and of the massive civilian workforce that supports it — and if waste is your Eden, then you’re in paradise.

The department’s budget is awash in waste, as you might expect from the only major federal agency that has never passed an audit.  For example, last year a report by the Defense Business Board, a Pentagon advisory panel, found that the Department of Defense could save $125 billion over five years just by trimming excess bureaucracy.  And a new study by the Pentagon’s Inspector General indicates that the department has ignored hundreds of recommendations that could have saved it more than $33.6 billion.

To continue reading: The Hidden Costs of “National Security”

Does the Military Need to Be Rebuilt? By Laurence M. Vance

The military doesn’t need to be rebuilt; military and foreign policy need to be completely rejiggered. From Laurence M. Vance at lewrockwell.com:

Rush Limbaugh rarely has guests on his radio show, but sometimes makes an exception for Republican politicians.

This time it was for Vice President Mike Pence. Limbaugh was asking him about the Consolidated Appropriations Act (H.R.244) that Congress passed to fund the federal government until the end of the fiscal year (Sept. 30, 2017). Pence defended the budget compromise because it increased defense spending. Said Pence:

I think this sends a decisive message to the world that under President Trump’s leadership we’re gonna make the strongest military in history even stronger.

Rush, let me be real clear. The number one priority of President Trump is to rebuild our military, to restore the arsenal of democracy. And I gotta tell you, to get Democrats in Washington, D.C., to agree to a $21 billion increase in a short-term budget bill — and, you know, the president’s calling for the largest increase in military spending since the Reagan administration in the upcoming budget, I think is no small — it’s no small accomplishment.

Conservative think tanks agree with Trump and Pence. But of course, they have always pushed for increased spending on the military.

An article for the Heritage Foundation maintains:

The Congress acted correctly and courageously in 2017 to begin to regrow the Army by adding 17,000 active-duty soldiers to President Barack Obama’s proposed request for 460,000. There is near consensus that the last four years of strength cuts have reduced the Army’s ability to execute its missions and significantly raised strategic risk to the country.

Now faced with a similar situation for fiscal year 2018, Congress should act again to incrementally increase the size of the Army and authorize the prudent growth requested in the Army’s unfunded requirements list.

Congress should not allow a “pause” in the rebuilding of the Army. It should instead continue to reverse Obama’s ill-advised cuts to the Army.

To continue reading: Does the Military Need to Be Rebuilt?

What Happens When All We Have Left Is The Pentagon? by William D. Hartung

If President Trump is reining in the US’s foreign military committments, shouldn’t defense budgets be getting smaller, not larger? That, unfortunately, is not the direction they’re headed. From William D. Hartung at tomdispatch.com

Trump’s Vision of a Militarized America

At over $600 billion a year and counting, the Pentagon already receives significantly more than its fair share of federal funds. If President Donald Trump has his way, though, that will prove a sum for pikers and misers. He and his team are now promising that spending on defense and homeland security will increase dramatically in the years to come, even as domestic programs are slashed and entire civilian agencies shuttered.

The new administration is reportedly considering a plan — modeled on proposals from the military-industrial-complex-backed Heritage Foundation — that would cut a staggering $10.5 trillion in federal spending over the next decade. The Departments of Energy, Commerce, Transportation, and State might see their budgets slashed to the bone; the Corporation for Public Broadcasting would be privatized; and (though the money involved would amount to chicken feed) the National Endowments for the Arts and for the Humanities would be eliminated altogether. In the meantime, the ranks of the Army and Marines would be expanded, a huge naval buildup would be launched, and a new Star Wars-style missile defense system would be developed — all at a combined cost of up to $1 trillion beyond the already munificent current Pentagon plans for that same decade.

The specifics won’t be known until Trump’s first budget becomes public in perhaps April or May, but as we wait for it, Republican Senate Armed Services Committee Chairman John McCain has just taken the unusual step of releasing his own spending blueprint for the military. It suggests that a key senator and the president and his team are on the same page when it comes to military funding. At an extra $430 billion over the next five years, the numbers in McCain’s plan are similar to the potential Trump buildup.

To continue reading: What Happens When All We Have Left Is The Pentagon?